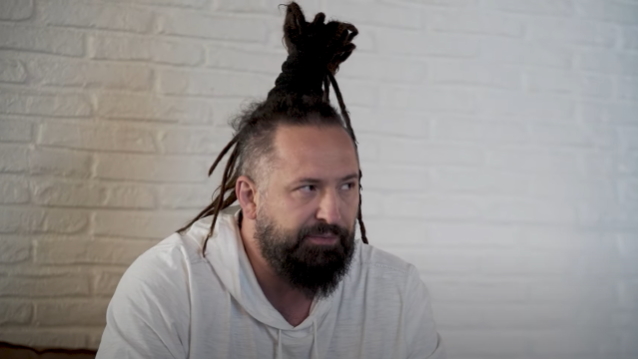 In a new video recapping the beginning of FIVE FINGER DEATH PUNCH's recently launched European tour, guitarist Zoltan Bathory spoke about the band's upcoming album, "AfterLife", which is due on August 19. He said (as transcribed by BLABBERMOUTH.NET): "We titled this record 'AfterLife'. And 'AfterLife', to us, means several different things. And one of them is that this is the afterlife of the pandemic. So, in some way, it's a paradigm shift because that global event changed, in my opinion, it changed how people think of life. You had a forced two-year break — that's what happened. People all of a sudden didn't go to work all over the world. And after a couple of months, you start thinking about, 'Hmmm, this is interesting. I'm not spending that much money on gas anymore.' And then you start thinking about that. 'Well, hold on for a second. So I used to spend money for gas that I put in the car so I can get in my car and drive to work so I can make money for gas in my car and for the car that I bought so I can go to work. Hmmm. And then I also bought this house so I can come home and rest so next time in the morning I can get up and go to work. I kind of think I like this.' So I think people kind of realized that they were in a hamster wheel; they realized that they're chasing something. They realized that maybe we were too busy to notice, is this really life?"

He continued: "If you think about that, the meaning of afterlife, you realize that it means something completely different for almost every culture. However, whatever it means to you will dictate how you live your life. If you're a Viking, you believe that you have to go to Valhalla. The only way you can go to Valhalla [is] if you die in honor in battle. So if you look at a Viking, they're gonna go, 'Yeah, I have to go to battle and I have to die in battle because that's my idea of the afterlife.' Now, if you go for, let's say, the Buddhists. The Buddhists believe that they have to become enlightened, and so they meditate and they go through these spiritual processes to ascend into a different spiritual plane. So most people in that region, they live their life thinking, 'I have to be spiritually evolved.' Then you come to your Judeo-Christian sort of countries that have Catholics and they have this duality of heaven and hell — punishment and reward. So they're gonna their entire life by these commandments and what they can and cannot do, what they're gonna go to heaven for and what they're gonna be punished for. So, interestingly, your relation to this idea, what happens after you die, the afterlife, will actually dictate your entire life — how you live, your moral codes and everything you do, in some way, will be connected to that."

"AfterLife" marks FIVE FINGER DEATH PUNCH's first album with its latest addition, renowned British virtuoso Andy James, who replaced Jason Hook in 2020. James was previously featured on "Broken World", a song that was included on the second installment of FIVE FINGER DEATH PUNCH's greatest-hits collection, "A Decade Of Destruction – Volume 2", which came out in the fall of 2020.

Bathory previously said that "Afterlife" was "hands down" his favorite record to make. "It is our ninth album, so at this point we have legions of loyal fans and our signature sound is more than established," he explained. "It became its own island, our ground zero we operate from and we can always come back to. So when we started this record, there was an excitement of impending musical adventures. We knew we could step away as far as we wanted to; there was a freedom of truly 'anything goes.' This resulted in an album that is way more diverse than our previous ones while it feels more unified, because there is a framework of overarching stories in Ivan's [Moody, vocals] lyrics and interconnecting musical motifs between songs. It was not planned as a concept album, but we were so hyper-focused on painting a complete picture, it somehow feels like one... We are very proud of it and are just as impatient as the fans waiting for the release. Can't wait to share it."