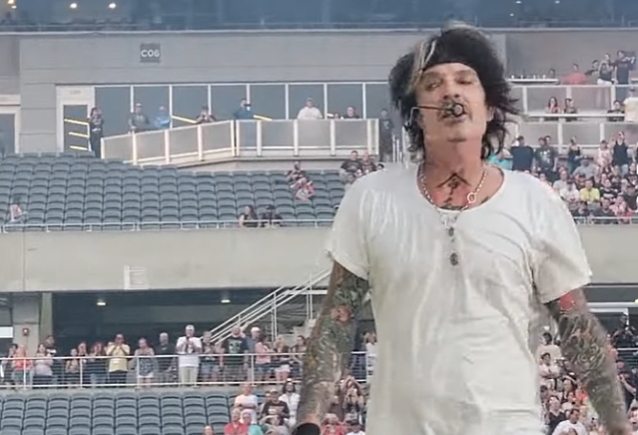 MÖTLEY CRÜE's Tommy Lee once again sat behind the drums for only the first three songs of the band's concert last night (Sunday, June 19) at Camping World Stadium in Orlando, Florida.

As was the case at the opening show of "The Stadium Tour" three nights earlier in Atlanta, Georgia and Saturday night in Miami Gardens, Florida, the drummer defied doctor's orders — despite sustaining four broken ribs — to take part in the CRÜE's long-awaited return to the stage with DEF LEPPARD, POISON and JOAN JETT & THE BLACKHEARTS.

Lee played "Wild Side", "Shout At The Devil" and "Too Fast For Love" with his bandmates and then left from behind his kit to address the crowd.

"This is the last time I'm gonna say this shit, 'cause that's getting' fuckin' old," he said (see video below). "About fuckin' two weeks ago, I broke not one, not two, not three but four fuckin' ribs right here. Crack. I'm not gonna tell you how because it's fuckin' bullshit. I wish I had a cool story for you, but I definitely don't, man; it ain't fuckin' cool… Anyway, my buddy Tommy back here — Tommy's gonna fuckin' help me out here.

"I don't know if anybody here — I'm sure somebody had to break some ribs. It is fucked up. It hurts to breathe; it hurts to fuck; it hurts to play drums; it hurts to do fucking anything.

"Anyway, Tommy, you fucking get it, buddy.

"I'll see you guys in a minute. I'll be back. On with the motherfuckin' show. Let's go."

The setlist for the Orlando concert was as follows:

On Friday, MÖTLEY CRÜE bassist Nikki Sixx praised Tommy for "beasting" through the first five songs of the band's set in Atlanta, writing on Twitter: "The fact that Tommy was told by the doctor to not play with 4 broken ribs & he beasted half our show is a miracle. We are a band and are proud of his strength. He is doing the whole tour and day by day adding more songs. What a fucking animal. Anybody out there ever break ur ribs?"

The next show on the trek is scheduled to take place Wednesday night (June 22) at Nationals Park in Washington, D.C.