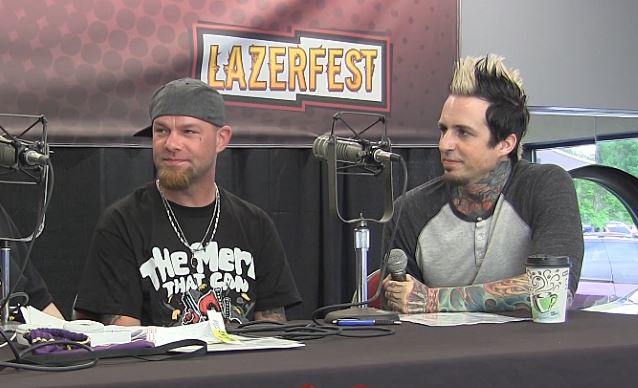 Des Moines, Iowa radio station Lazer 103.3 conducted an interview with FIVE FINGER DEATH PUNCH singer Ivan Moody and drummer Jeremy Spencer at the Lazerfest on May 10 in Des Moines. You can now watch the chat below.

Speaking about FIVE FINGER DEATH PUNCH's forthcoming album, Spencer said: "We're excited. It's called 'Got Your Six'. It comes out in probably… I don't know. Maybe late July [or] early August. We're not sure yet."

Commenting on FIVE FINGER DEATH PUNCH's packed touring schedule in the coming months, Moody said: "I just bought a new house about three months ago, and I've spent four whole days in it. It never ends."

He continued: "I'm going back to Vegas with these guys to do touchups on [new] videos [in support of the forthcoming CD] and whatnot. But I live in Colorado, so I won't even get to see [my new house] until after I get back from Europe."

"Got Your Six" was once again helmed by Kevin Churko, the Canadian record producer/engineer and songwriter who currently lives in Las Vegas, where he works out of his private studio, The Hideout Recording Studio.

Spencer spoke about the band's new material in a recent interview, saying, "I'm digging it, man. It's actually more brutal, with more extreme dynamics. There are some really mellow parts and then some really brutal parts. So we're running the whole gamut of sounds."

As previously reported, FIVE FINGER DEATH PUNCH and PAPA ROACH will head out on the road together this fall. Support on the trek will come from IN THIS MOMENT and FROM ASHES TO NEW.