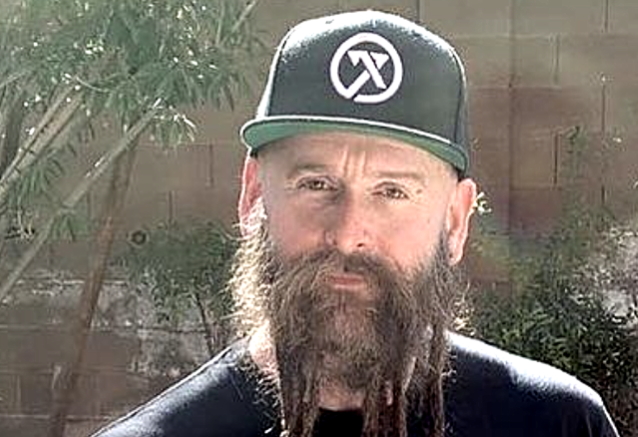 FIVE FINGER DEATH PUNCH's CHRIS KAEL Has Written And Recorded Eleven New Songs During Pandemic: 'It's A Hell Of A Record To Listen To'

During a recent appearance on "Drinks With Johnny", the Internet TV show hosted by AVENGED SEVENFOLD bassist Johnny Christ, FIVE FINGER DEATH PUNCH bassist Chris Kael discussed how he has been keeping busy during the pandemic. He said (as transcribed by BLABBERMOUTH.NET): "Over the break [from touring], I realized that I was on the couch doing nothing. Before I got sober, one of the things that stopped me from getting sober was the brain telling me, 'Oh, man, if you stop, you're not gonna be creative. You're not gonna enjoy doing this.' And then the universe spoke up and was, like, 'Motherfucker, you haven't written shit in four years. What the fuck are you worried about?' … But then once I got sober and started…

"It's a double-edged sword being that sensitive musician that you could feel everything — probably more than most people feel," he continued. "You're definitely overly sensitive to all of the stuff that's going on around you, and unless you have an outlet for it, it's hard to channel. But thankfully, I've got music — I've got the bass, I've got the guitar — and was able to put those feelings into music during last year. I wrote — I think I'm on song number eleven right now from writing last year. And [it's been] incredibly therapeutic; just a hell of a purge.

"At the end of the day, whatever happens with these songs, they've already fulfilled the purpose that I went into it with, [which] was to get through all the stuff that I was feeling last year and use that as therapy," Kael added. "And hopefully at some point it'll get out there somehow where the stuff that I went through will help other people going through the same kind of stuff. But as of right now, those songs have fulfilled the purpose that I went into writing last year, and everything else from here on out is a bonus. So, it's a hell of a record to listen to in the car while I'm driving around [delivering stage-played bass guitars to people who have ordered them]."

FIVE FINGER DEATH PUNCH performed for the first time in a year and a half on August 20 at the Iowa State Fair in Des Moines, Iowa.

The band recently entered the Hideout Recording Studio in Las Vegas, Nevada to begin recording its new album for a 2022 release. In addition, FIVE FINGER DEATH PUNCH has commenced re-recording its debut LP, 2007's "The Way Of The Fist", for its 15th anniversary.

FIVE FINGER DEATH PUNCH's upcoming album will be the group's first with its latest addition, renowned British virtuoso Andy James, who replaced Jason Hook last year. James was previously featured on "Broken World", a song that was included on the second installment of FIVE FINGER DEATH PUNCH's greatest-hits collection, "A Decade Of Destruction - Volume 2", which came out last fall.