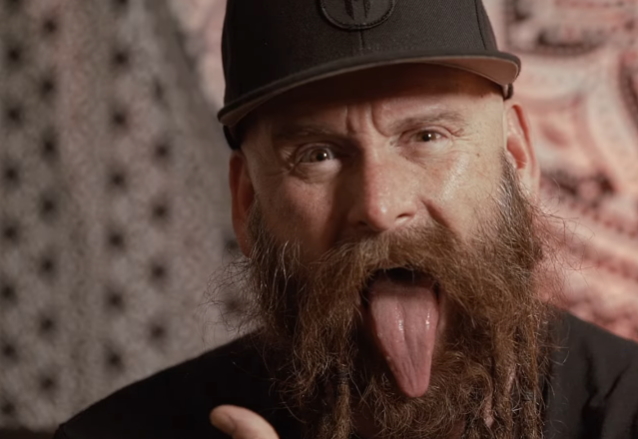 FIVE FINGER DEATH PUNCH bassist Chris Kael, who recently admitted that he relapsed with alcohol more than two years ago during the coronavirus pandemic, was asked in a new interview with Meltdown of Detroit's WRIF radio station if has managed to retain his sobriety in the months since he and his bandmates have returned to the road. He said (as transcribed by BLABBERMOUTH.NET): "Still sober, yup. I had a little bit of a dip in 2020. [It was due to the] pandemic, and there was a breakup and all kinds of stuff. I realized I'm an emotional-trigger guy… I actually wrote a ton of songs over the break too. So I had the relapse in 2020, pulled myself together through the process of writing music. And one of those songs ended up on the new DEATH PUNCH record, actually."

Pressed about how he got sober this time around, Kael said: "It's a long process. I basically just had to… I don't even know what the turnaround was, honestly. Just finally realizing just, like, 'Ugh, why am I doing this?' You're tired of feeling like that. I did the work before I had the whole thing happen, to come back to it and be good. And, yeah, it's been nice. I feel definitely a whole lot stronger than I did before, because I think I've said it in press before, I would find myself, before that happened, being in meetings and people are, like, 'Oh, it took me a long time to get it. I kept on having to go back.' And I'm, like, 'Not me. I went to rehab once and I'm perfect now.' A few emotional triggers and a worldwide pandemic, and boom! — I was right back in. So I talk about it now because it's unfortunate, but if you can pull yourself back up, you can definitely build a ton of strength out of those cracks in the veneer."

For much of the last four years, Kael had touted having a sober lifestyle, saying that he was the "strongest" he had ever been after coming out of rehab. However, the 48-year-old bassist told Jason Rockman of Canada's "The Rockman Power Hour" in March that he fell off the wagon as the coronavirus lockdown continued, saying that "it was not good."

"I got sober February 3rd, 2018," Chris said. "Were it not for a mishap during the pandemic, which I haven't spoken publicly about until today, a mishap over the pandemic, it would have been four years [sober]. But right now I think I am… I have to go back and look at the date, honestly."

He continued: "I remember I went to a concert and I was trying to do… I was, like, 'All right. I fell off the wagon. I've been back on the wagon. I'm going in. I'm gonna try to control drinking this time. I'm gonna allow myself to have two. And if I do two, cool.' Nope. Did three. Haven't had a drink since. I said, 'I can't do it.' Even trying to limit myself to two, I couldn't do that."

When Rockman commented that if having three drinks one night was the extent of Chris's relapse, it wasn't so bad, Kael countered with: "No, no. It was much worse before that. August of 2020, post-breakup, post-being in a house by myself, it was not good. So as I turned to not wanting to feel for a little while… Now, [I'm] back to it again — I'm doing my meetings, doing all the stuff, working with my sponsor, working the steps and all that stuff now."

Kael said that he actually tried to get sober a couple of years before he went into rehab. "I was trying to do it on my own — and I'd been vocal about, 'Yup. I gave it up. I did this,'" he said. "I did an interview with [comedian] Dean Delray and I was talking about it. A short time thereafter, I was out on the road and I caught a case of the fuckits with whatever I was going through at that point — overdramatizing everything 'cause that's what I liked to do back in the day. Now I'm much more centered, much more focused. But I had just poured a drink and I was walking off the bus and a fan came running up to me: 'Kael, I wanna thank you. You going sober made me think about myself going sober.' And there I am standing with a fucking [drink] in my hand. 'Yeah, man. I'm just doing what I can to help out.' And I felt like such garbage.

"So it was important for me, for my own accountability, to be vocal about it," Kael explained. "'Cause I'm a people pleaser — I wanna make people happy; I don't want people to be disappointed in me — so, in the beginning, it was very important for me to be vocal about it so that others would know and I kind of have that babysitter collectively around the world watching. I'm much better at self-accountability and not needing other people to have their eye on me. I think I'm out from under that rock at this point. But collectively, we do the groups, we do our meetings — all kinds of stuff. So I still have that support system — even tighter support system. My God, [during] the pandemic, I did more meetings in Zoom than I ever did before the pandemic.

"Obviously, COVID was awful, but if you look for the silver lining to things, you can turn a negative into a positive if you just clear your mind, look around and take a full scope of what's going on and just really continue to do the right thing," he added.

Kael previously opened up about his battle with alcohol and drug addiction in a February 2021 interview with MACHINE HEAD frontman Robb Flynn's "No Fuckin' Regrets With Robb Flynn" podcast, FIVE FINGER DEATH PUNCH bassist Chris Kael. At the time, he stated about his decision to get sober: "I was doing blow, but I realized when I went to rehab, I was always the key bump guy. So just keeping the levels up just enough to fight any sort of depression. And then also through that time, Ivan [Moody, FIVE FINGER DEATH PUNCH singer] was very much the focus of the issues [with drugs and alcohol] that he was going through at that point. No surprise and no secrets there — we've all seen the stuff that happened back then. But he was the focal point for everybody. So I was kind of able to hide in the background while he was dealing with his stuff. So I got to slide under the radar most of the time.

"The real decline for me started maybe two months before I cleaned up," he continued. "Just life situations — I was going through a divorce at the time… We got divorced after I got out of rehab, but the process had kind of been started before. And honestly, my goal going into rehab was — I wrote [my then-wife] a note; she may still have it; I'm sure she probably does. It was basically, like, 'Hey, I'm going to get help' and become the guy that she married in the first place and not this person I had become. So I very much wanted to get back and get out of rehab and go back to being married and whatnot. But it changed. And it was real bad probably the last three weeks of it. I didn't get too out of control. [There were] a couple of times here and there where I would really let go and there were indications that things were getting worse for me. But I basically ended up in just like a real depressed period, and I decided, 'Fuck, man. I can't do this anymore.' I called my buddy Greg, and he took me to rehab that day. And it was the weakest I've ever felt in my life, walking into that rehab. But then once I got out of rehab, I was, like, that's the fucking strongest I've ever been, is admitting that I can't deal with this and I need to figure something else out."

Kael went on to say that things got so bad for him at one point that he didn't always enjoy performing live. "When you're on stage at Wembley, sold-out show, and you're on stage going, 'Ah. Can we just get the fuck off here?', something's fucking wrong with your endorphin levels," he laughed. "My body was just so beat up. I never played fucked up on stage, but I definitely played tired from the night before many times. And that was one of those nights. My body was beat up from the night before. We probably had a day off in London. Me and my bass tech used to daydrink all day long."