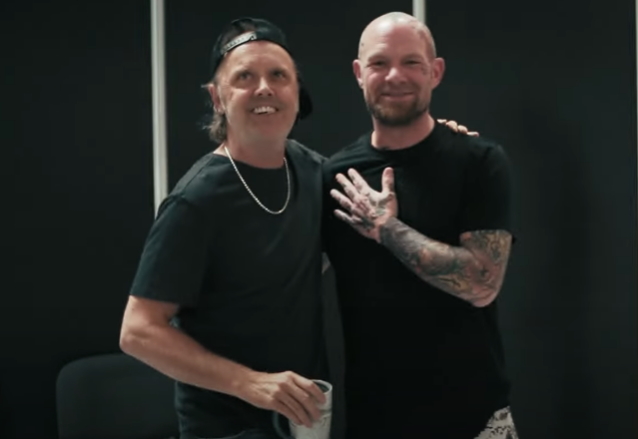 In the clip, FIVE FINGER DEATH PUNCH singer Ivan Moody says: "Everyone sets goals, as you should. But you have to understand, for us, this is the apex, this is the climax, this is the top of the fucking hill. And it's amazing to me that we've been on tour for almost 15 years and never crossed paths with this band. And I've gotta tell you, they paved the road for any of us, and anyone that argues that fact is out of their fucking mind. The one and only METALLICA."

Back in 2016, FIVE FINGER DEATH PUNCH bassist Chris Kael told Loudwire that METALLICA's classic third album, "Master Of Puppets", represented a turning point in his music tastes. He recalled: "I went to a place called Disc Jockey Records back in Lexington [Kentucky] and I had in my hand 'Master Of Puppets' and RUN-DMC 'Raising Hell' and I had to make that decision. Which one? I've heard about this band METALLICA through Circus magazine and whatnot, but I haven't heard the music, but I know RUN-DMC."

He continued: "I ended up picking up METALLICA and 'Master Of Puppets', and right from the first notes of 'Battery', hearing that beautiful guitar piece into crushing and everything that Cliff Burton did on that basically shaped me melodic-wise on bass right from the very beginning. So that album is probably one of the most influential in terms of making me want to play bass. I'll never be able to get to the same level talent-wise that Cliff Burton was, but it was a challenge."

In 2015, FIVE FINGER DEATH PUNCH's then-drummer Jeremy Spencer said that Lars Ulrich was a huge influence on him as a drummer and credited the METALLICA sticksman for inspiring him to play double bass.

"['Master Of Puppets' is] definitely my favorite, probably, metal album ever," Spencer said. "It's gotta be top two for sure. It's a toss-up between that and… I actually like 'South Of Heaven' by SLAYER too. But when I first heard 'Master Of Puppets', man, the drumming and the double bass, I never heard anything like that before as a young kid. It made such an impression on me that I just kind of wanted to do all things double bass. There's some really fast moments in 'Damage Inc.', and it just stuck with me and made such an impression on me as a drummer when I was younger; I instantly fell in love with it."

Asked what was so special about "Master Of Puppets" in particular, Spencer said: "I think they blended… They kind of had some European melody going on in the guitars, especially in the early records. That was different. But it was just… It was a different beast at that time; nothing sounded like it. There was an energy coming from that, and I think the riffs and the arrangements of the songs, it made such an impression on me and on so many other people."

Regarding how much of an impact Burton's contributions had on the way "Master Of Puppets" turned out, Spencer said: "I really don't know, but, obviously, he had some serious influence on them, 'cause their sound drastically changed [after his death]. But I love it. I think the first three records are incredible, to me."