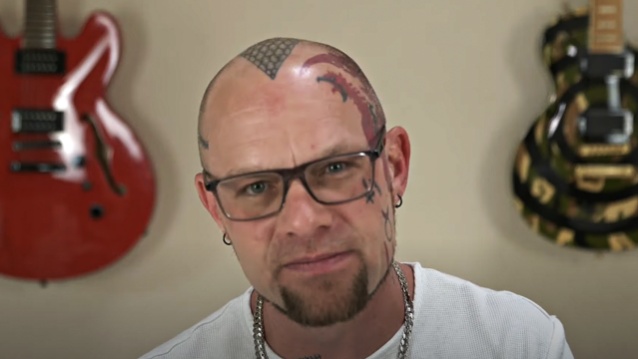 FIVE FINGER DEATH PUNCH's IVAN MOODY On Getting Through Pandemic: 'The Hardest Part For Me Was Being Sober'

In a new interview with Andy Hall of the Des Moines, Iowa radio station Lazer 103.3, FIVE FINGER DEATH PUNCH vocalist Ivan Moody was asked if there were "benefits" to the pandemic-related break for him or if he found that period especially challenging considering that he celebrated his fourth year of sobriety last March. He responded (as transcribed by BLABBERMOUTH.NET): "I would have to go with the latter on that one. No, I won't even say that. It was a little bit of both. The hardest part for me was being sober. There was a lot of day drinking going on during COVID, and I'd read a lot of articles [about] a lot of domestic violence disputes — a lot of just unnecessary stuff. And I think it brought out the worst and unfortunately some of the best in people, or fortunately, for that matter. Myself, I had a really hard time, 'cause I have this diabolical voice that sits in the back of me, always trying to convince me that I've been sober long enough, I've been good long enough, and so what's it really gonna damage if I wanted to turn the page and do something radical and bad again?

"So, for me it was really finding a medium, finding out what was gonna keep me on the straight and narrow, I guess you'd say," he explained. "And once again, whether it had been my kids, once again music stood up for me, because beyond my kids and my family there was really nothing to grab on to.

"We're fortunate enough that we play music for a living, but in the same token we have to sit by and watch all these hard-working, blue-collar people lose their jobs, go through what they went through, whether it be the grocery store rioting or collecting toilet paper or just figuring out employment," Ivan added. "It was an eye opener for everybody, and it's something that Zo [guitarist Zoltan Bathory] and I have talked about a few times. This wasn't just something that was quarantined — no pun intended — to one area. This is the first time, really, in history that the entire world was affected by something. Even World War II was segmented; there were parts of the world involved — it wasn't necessarily the world. However, when it came to the pandemic, every single human being on this planet was affected. So, for me, utilizing that energy and digging into what other people were saying and feeling and filtering it and putting it back through my platform is not only a gift but in the same token necessary. So it was tough, man. It was very difficult. But at other times I was very grateful for the tools I've been given and the strength that I have to help me get through it, much less help other people."

Ivan previously said that he nearly died due to an alcohol-related seizure and woke up surrounded by EMTs and his daughter holding him while crying. He also admitted that he went to rehab five times before the last time finally stuck.

Moody's near-death experience was recounted in FIVE FINGER's music video for the song "The Tragic Truth" which was released in January to coincide with Ivan's 42nd birthday.

In September 2018, Moody told the WEBN radio station that he was "back and forth for a while" in his struggle to stay sober. "I'd do three months, then relapse." He added: "Recovery, you have to be committed; it's an honest program, and I wasn't being honest with myself at the time. I'm very, very proud of the progress I've made."

Moody went on to credit several of his friends and musical peers with helping him get through some of his darker moments. "Rob Halford [JUDAS PRIEST] is the person that I called a lot of the time when I was in recovery," he revealed. "I think he's been sober now for going on 40 years — maybe, I think, a little longer than that; I could be wrong. But Jamey Jasta [HATEBREED] — another one. Jamey's been sober now for [two decades]; Jonathan Davis [KORN]; so on and so forth. So these were all people that I looked to when I was struggling, and I was very, very lucky and blessed to have them on my team."

Moody also revealed that he was sober but massively hung over during his onstage meltdown in Europe in 2017, with the band sending him home after that and later welcoming him back on a "probationary" basis after both Phil Labonte from ALL THAT REMAINS and Tommy Vext from BAD WOLVES filled in on a couple of tours.