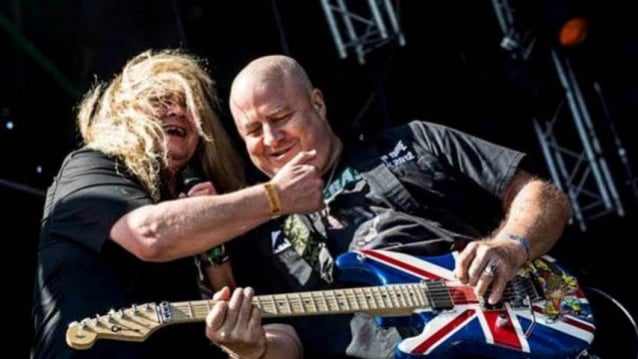 GRIM REAPER's founding guitarist Nick Bowcott has paid tribute to the band's singer Steve Grimmett who died on Monday (August 15) at the age of 62.

"This heartbreaking news has rendered me speechless ever since it was broken to me. And, to be frank, it has literally broken me, so I'm just gonna let the words flow from my heart and see what happens...

"Only the good die young - or so it is said. At the age of 62, Steve was young - too darned young. And, he wasn't just good - he was GREAT - freaking great: not only as a singer, but as a human being. IMHO, the only thing bigger than his amazing voice was his heart.

"As a metal fledgling, I first became (very!) aware of Steve in a local 'rival' band - he was in MEDUSA and I was in the band I co-founded, GRIM REAPER. The reason I put '' around the word rival is simply because we actually weren't rivals at all! GRIM REAPER always cheered on MEDUSA and vice-versa.

"Through good fortune (actually, I feel 'destiny' is a better word),a few years later, Steve joined GRIM REAPER and due to his voice, REAPER's music morphed from something that was very much THIN LIZZY & VAN HALEN inspired, to pure melodic metal a la MAIDEN and, of course, the mighty PRIEST. Then we co-wrote 'See You In Hell' and everything slowly but surely changed...forever.

"I've always said that my 5 favorite metal singers are: Rob Halford, Ronnie James Dio, John Bush, David Wayne and - of course, Steve. Yep, IMHO he was, is and always will be that freaking good. Still can't believe he's gone - and my heart, thoughts and prayers are with his dear wife, Millie, his family, loved ones and friends....damn.

"Heaven came down today and took back an angel with a mighty roar. What a man, what a voice, what an honor, what a pleasure.

"Thanks for everything Steve, mate - you will be forever missed and your voice will always live on. Until we meet again - Rest In Peace, my dear, dear friend and comrade in metal arms."

Steve's passing was confirmed by his brother Mark Grimmett, who wrote on social media: "I don't really know where to start so I guess I will just come right out with it. It is with great sadness and a very heavy heart that I have to tell you all as many of you know him my very talented brother Steve Grimmett very sadly passed away today, my heart goes out to Millie his wife my Mum and Dad, Russell , Sami and Ethan . I will miss you more than words will ever say , love you bro xx".

Steve's wife Millie wrote: "This is the hardest thing I've ever had to write but it's with a heavy & shattered heart to say that my beloved Steve died suddenly & unexpectedly on Monday 15th August.

"(The family appreciate all the messages we’ve had so far but ask that you allow us to morn)."

Producer Max Norman, who worked on GRIM REAPER's classic third album, 1987's "Rock You To Hell", weighed in on Steve's death, writing: "Very distressed to hear that old friend and singer for GRIM REAPER, Steve Grimmett has left us... A terrific vocalist, and all around perfect gentleman - you will be missed my friend. Condolences to Mark and Millie and friends and family - a very very sad loss..."

Grimmett's passing comes more than five years after he had his right leg partially amputated in January 2017 when an infected wound on his foot spread to the bones in his leg partway through the group's five-week tour of South America. The life-saving surgery was carried out in Ecuador and the frontman was in hospital for just over a month while fans raised $14,000 to bring him home after his insurance company refused to pay because of the type of work he was doing.

GRIM REAPER's story bgan in 1979 after successfully fighting off hundreds of bands in a local Battle Of The Bands competition. This win, combined with an already sizeable following, aroused the interest of Ebony Records. Signing with the small U.K. label, GRIM REAPER released three albums in rapid succession to international acclaim. Due to legal turmoil with Ebony, GRIM REAPER would disband in 1988. Grimmett would go on to record with ONSLAUGHT, LIONSHEART and more recently THE SANITY DAYS. His renowed vocal range remains one of metal's most identifiable with loyal fans turning out in numbers to hear him perform.