According to The Pulse Of Radio, FIVE FINGER DEATH PUNCH will premiere its new song "Inside Out" this Sunday night/Monday morning (December 1-2) at midnight. A teaser has been posted online. The track will likely be the first single from the band's upcoming eighth studio album, due out in early 2020.

Singer Ivan Moody told The Pulse Of Radio that he wanted to experiment with the way the band writes songs on the new LP. "I'm really sick and tired of safe music," he said. "There's this structured way that everybody has to write their fucking music, and it's got to be 'verse, chorus, verse, chorus, breakdown, OUT!' You know? And it's so monotonous to me."

Moody spoke about "Inside Out" with Metal Hammer magazine earlier this month, saying: "It's about alcoholism. It's about my family leaving. It's about my bandmates. It's about looking at myself in the fucking face and saying, 'Dude, you're going to have to do this because nobody else is coming.'"

He said about the record in general: "This album has not been fucking easy to make. There was always somebody fucking quitting. Somebody wants to fire another guy, somebody's unhappy with someone's lifestyle. These things happen on a daily basis."

FIVE FINGER DEATH PUNCH's new disc is once again being helmed by Kevin Churko, the Canadian record producer/engineer and songwriter who currently lives in Las Vegas, where he works out of his private studio, The Hideout Recording Studio.

FIVE FINGER DEATH PUNCH guitarist Zoltan Bathory recently said that the band's new LP could be its best yet. He said: "We have a little pie that we belong to in the musical spectrum, and within that, the grooves — there are these big, nasty grooves that feel just heavier and grimier, and that's kind of what's happening. The energy of what's in the band now is affecting this process."

He said the band is taking their time making the album and stated: "It will be what it will be. At the end of the day, we are in a fortunate situation where we can take as long as we want to. We can be in the studio forever if we wanted to."

The drums on the disc were laid down by Charlie "The Engine" Engen, who made his live debut with the group during its fall 2018 tour with BREAKING BENJAMIN. He stepped in for original drummer Jeremy Spencer, who left the band last December due to a back injury.

FIVE FINGER DEATH PUNCH kicked off a U.S. headlining tour earlier in the month. Support on the trek is coming from THREE DAYS GRACE, BAD WOLVES and FIRE FROM THE GODS. 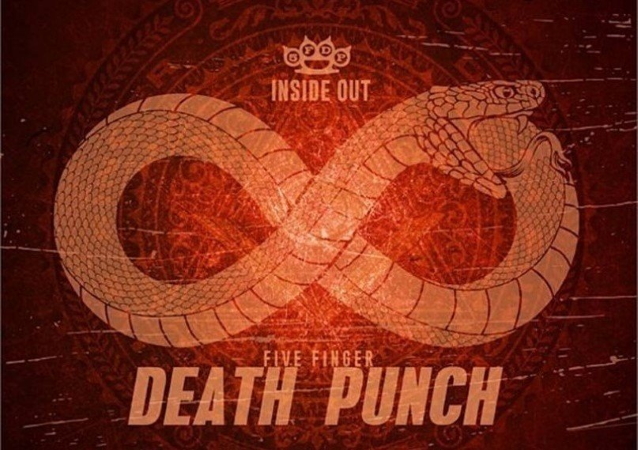