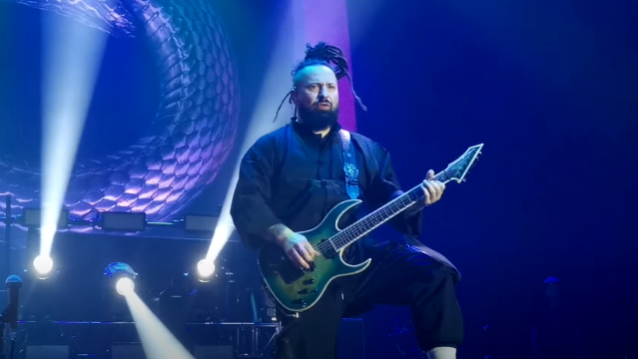 FIVE FINGER DEATH PUNCH's ZOLTAN BATHORY On 'AfterLife': 'This Is The Most Diverse Album That We've Ever Done'

FIVE FINGER DEATH PUNCH guitarist Zoltan Bathory spoke to Finland's Janne Vuorela about the band's mindset while working on its upcoming album, "AfterLife", which is due on August 19. He said (as transcribed by BLABBERMOUTH.NET): "It's our ninth record, so at this point everybody knows how we sound like; if you're into hard rock/heavy metal, you know the band, you know the sound — you hear the first couple of riffs, you know it's FIVE FINGER DEATH PUNCH. So it was, like, we don't have to keep proving ourselves, so to speak. And it gave us this freedom of, 'You know what? Let's just record everything — whatever comes, let's just record it.' And that gave us this freedom of… I always compare this to a band like QUEEN. We don't sound anything like QUEEN, but if you're trying to categorize QUEEN, you cannot. QUEEN doesn't fit in anywhere. And to me, that means that they achieved this musical freedom where they can be whatever. They can play 'Bohemian Rhapsody' or whatever they want. They wanna play heavy metal, then that's what they're gonna do; they're not tied to something specific. And so that was kind of the idea — can we get that? Can we get to a place where [we can] just write anything; it doesn't matter. And I think we achieved that."

He continued: "This record is the most diverse album that we've ever done — very different from everything we've ever done — yet it still sounds like us. So with that, I feel like we achieved kind of that place where anything goes. We're just FIVE FINGER DEATH PUNCH; it is what it is. It's just music."

Asked to elaborate on the musical direction of "AfterLife", Zoltan said: "I guess we're still in the broad spectrum of rock music, but all the influences... There are some songs that have even, I would, some '60s sort of vibe in there. And some of the songs are very futuristic, almost kind of a cyber-punk feel to it; some moments are industrial stuff. And then there are songs where we use very complex sound design.

"I wanted to do a song that is sort of the soundtrack to the process of death. I had two near-death experiences and very spiritual experiences where I wanted to create that sound, like what you hear. In the process of dying, the perception of sound gets kind of weird; everybody gets broken down, almost like you hear the sample rate of your own mind. The sound is not actually continuous but there are tiny, tiny gaps between. And as your body is shutting down, this becomes very apparent. And so we created the song 'Judgment Day' and literally built the song around that — like, how does it sound like when you die? There's a sound; there's a sound that you hear. And we built it from that and gave it to Ivan [moody, vocals]. And because he also had near-death experiences — he flatlined and he had to be brought back, so he actually died. And he immediately recognized it; that's the crazy thing. The second he heard it, he literally said, 'Oh, man. This freaks me out.' He immediately knew what the song was, just by the sound. And he was, like, 'This gets me freaked out, because I've been in this place; I know what this sound is.' And for a while he didn't even wanna record it because he thought, like, 'Wow. Every time I listen to this song, it takes me back to that place where I was dying.' And then eventually he actually did the song. So 'Judgment Day', that's why it has that weird song, because that's what we wanted to create.

"I guess because our instrumentation is drums, bass, guitar, guitar, vocals, that's always gonna be rock sort of music. So we're still a rock band, hard rock — whatever — but I don't know if I can categorize this particular album beyond that."

The "Afterlife" title track, which was released as a single in April, recently gave FIVE FINGER DEATH PUNCH the most consecutive No. 1s on Billboard's Mainstream Rock Airplay chart. The song was the band's 13th total No. 1 and eighth entry on the chart in a row. FIVE FINGER DEATH PUNCH broke out of a tie with DISTURBED and SHINEDOWN, each of whom has seven consecutive No. 1s on the chart.