Last month, it was announced that a selection of the world's top music artists are turning bike designers to create a set of one-of-a-kind Brompton Bikes. The bikes, designed by artists including LCD SOUNDSYSTEM, RADIOHEAD, Phoebe Bridgers and RISE AGAINST are to be offered through Greenhouse Auctions in an effort to raise money for Crew Nation, a global relief fund launched by Live Nation to support live music crews affected by COVID-19 and the near total pause on concerts.

Now, to launch the auction, two very special bikes designed by Taylor Hawkins and Nate Mendel of the FOO FIGHTERS have been unveiled by Brompton, with bidding on Greenhouse Auctions.

Inspired by his nickname of "The Hawk," Taylor's design uses Brompton's sleek Black Edition bike as a base, and incorporates a dramatic black and yellow colorway, featuring hawk silhouettes on the frame. Nate's bike borrows a design based on the FOO FIGHTERS' latest album, "Medicine At Midnight", and uses a nickel front frame to highlight the FOO FIGHTERS logo.

All 14 bikes are available for live bidding through June 12 on Greenhouse Auctions, an online auction platform designed to empower artists and promote diversity — with 100% of the profit going to Crew Nation.

Tevis Jory, music project lead and North America sales manager at Brompton, said: "For every tour and festival announced, there are countless road warriors still reeling from the impact of COVID-19 tour cancelations and closures. At the same time, the outdoor industry has thrived. As a brand, we felt compelled to give back to an industry that was hurting.

"We've gotten to know so many in the live music community through our stateside Band Bike Hire program, which allows any touring crew or band to reserve bikes free of charge for the entirety of their U.S. tour, and we wanted to find a way to support our friends after a year with a near total pause on concerts."

Added Shlomi Rabi, founder of Greenhouse Auctions: "Greenhouse is thrilled to be hosting this important event in which two beloved industries converge for the best possible reason: supporting those impacted by the pandemic. As a platform committed to empowering underserved communities, we are heartened by the deeply admirable initiative that Brompton has launched to give back to the music industry, its longtime ally. In doing so, Brompton is giving the public the opportunity to not only own a superbly constructed vehicle custom designed by musical legends, but the chance to provide a sustainable and safe runway for the tireless crew members in the music industry." 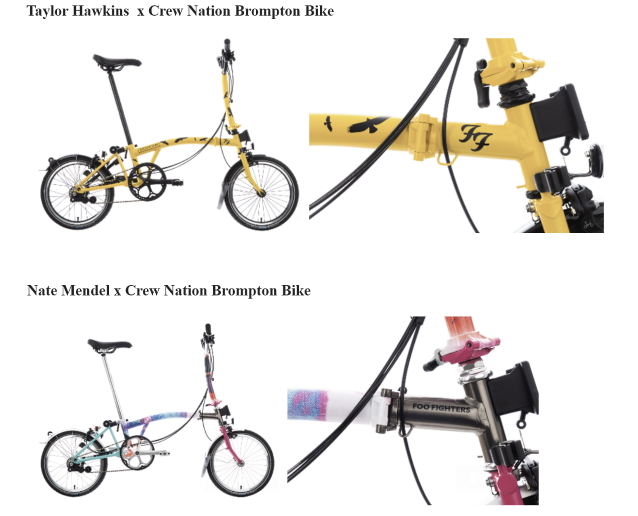