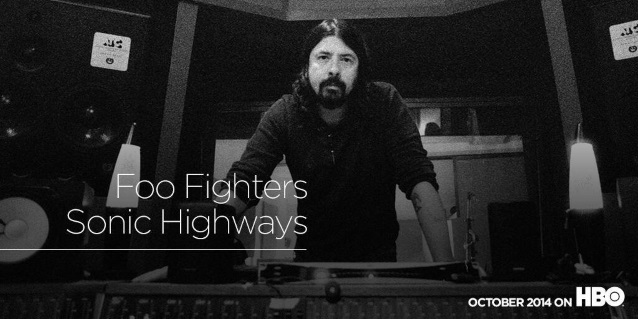 According to The Pulse Of Radio, FOO FIGHTERS frontman Dave Grohl told Canada's QMI Agency in a new interview that he's still finishing up the band's new album, "Sonic Highways", as well as the upcoming HBO series about its creation. Grohl explained, "This has been two years of my life — and I'm still not done, man. On the break between the last interview and this one, I had to go in there and approve edits on the next episode that we're working on. My life has been consumed by this thing — which is amazing, and I'm so psyched — but, when it's done… I'll probably miss it. But, good God, I can't wait to get this thing (done)."

The album arrives on November 10, while the eight-part series, also called "Sonic Highways" and directed by Grohl, premieres on October 17.

Grohl and his wife Jordyn welcomed their third daughter, Ophelia, into the world August 1, although on a sad note, his father James passed away just five days later.

With the album and HBO series approaching their launch dates, Grohl said, "The day I'm really excited about is for people to hear the first [single], because it's unlike anything we've ever done before, but it's instantly recognizable as our band. If we've ever gone out on a limb with a rock song, it's this song."

The TV series documents the making of the album at iconic studios in eight different cities — Austin, Chicago, Los Angeles, Nashville, New Orleans, New York, Seattle, and Washington, D.C. — plus the history of each city's musical roots, scenes and the studio itself.