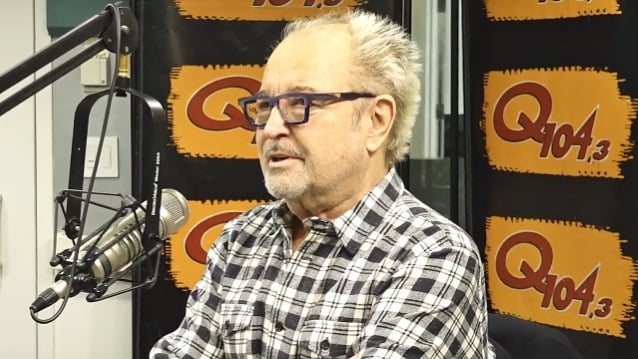 FOREIGNER founder Mick Jones was recently interviewed by the New York classic rock radio station Q104.3. The full conversation can be viewed below. A few excerpts follow (as transcribed by BLABBERMOUTH.NET):

On how FOREIGNER was able to keep the peace during its 40th-anniversary tour, which featured both past and present members, and avoid messy lawsuits like many of their peers:

Mick: "It's sad to see that. You see bands like that when you're touring and traveling, and you see bands who are on shows, and you can tell immediately if they're having a good time or not. When they get on stage, you can almost tell what it's going to be like. I mean, they're good, but there's something missing — the heart, the warmth and the connection. Somehow, through the ups and downs, we've managed to keep a thread there, and that's turned into more of a bond now. It went so well — everybody was really gelling together. Lou's [Gramm] very often a little shier, [but] he was having a ball. I was thinking, I was wondering how it was going to, you know, if anything was going to really screw up, but it was completely the opposite. It was just great."

On how original vocalist Lou Gramm and current vocalist Kelly Hansen got along during the tour:

Mick: "Very good. It was great. I was sobbing and turning around, trying not [to cry]. It was very emotional. I just couldn't keep it in. It was something that made me feel really good — like there had been a little bit of closure on the sore little moments of the past, and we washed over that."

Mick: "Jason was the one that when Phil Carson, our manager, approached me and we decided to work together on putting the band together [for the 40th-anniversary tour], the real impetus behind it came from Jason. He called me up one day and said, 'Mick, what are you doing? I'm out on the road and there's people wondering what's happening to FOREIGNER.' He just was relentless, because when I first met Jason when he was maybe 15 or something, I walked into this room, and there he was with a guitar, and he was singing 'Feels Like The First Time'. I've known ever since then that that song must have done something to him. It's great — he's family. We had such a great time last year. Another great thing about that is that Jason seems to attract people to come in earlier — not just the shuffling in, you know, during the first 20 minutes."