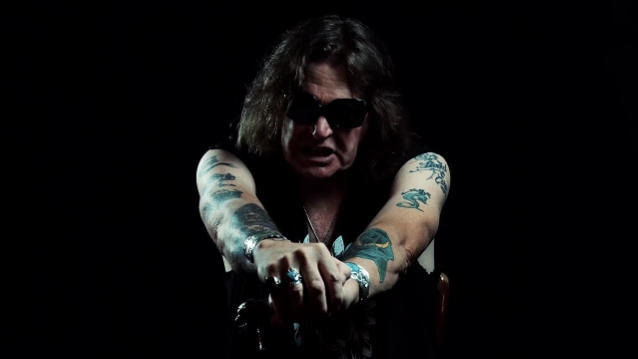 Former ACCEPT and BONFIRE singer David Reece will open for U.D.O., the band fronted by ex-ACCEPT vocalist Udo Dirkschneider, for 10 shows in Germany and Switzerland in early 2019.

Reece broke the news of the pairing during an interview with Jimmy Kay from Canada's The Metal Voice. He said (see video below): "I cannot tell you how amazing and blessed I feel at this time. I've known Udo for a long time, and believe me, when I met him, he was no longer the singer of ACCEPT, he was on his own, and we were in the same studio. But over the years, we've maintained a high level of respect for one another. His son Sven had a group called DAMAGE, who opened for me in Germany back in the mid-2000s. And Udo occasionally would pop in, and it was kind of a big deal for the audience to see Reece standing there and Udo Dirkschneider. So I'm really excited to see how the public reacts to this."

He added: "This is an opportunity that I'm thankful from the bottom of my heart to U.D.O. and his organization… I'm gonna give it everything I've got."

Reece went on to say that he isn't sure if his set for the tour will include any material from "Eat The Heat", the sole ACCEPT studio album that featured his vocals. "I have to ask Udo's permission, of course, out of respect, if I'm able to perform any of the 'Eat The Heat' stuff in my set, because Udo is the man; it's his show," David explained. "I will try, for the fans, to do some 'Eat The Heat' stuff. Judging by what the boss says, I will play it if he gives me his blessing… As an opener, you must bow to the respect of the King, which will be Udo. And I will discuss it with his management and him, if it's okay. But I'm just gonna go out there and kick ass. And I can't wait to break the door down with Germany. What an opportunity. I mean, Udo is amazing and going strong as ever live. The guy's got iron-clad vocal cords."

The current SAINTED SINNERS vocalist was recruited for "Eat The Heat" in 1989 following the departure of Dirkschneider. Reece's higher-pitched delivery was in sharp contrast to Dirkschneider's distinctive style, and overall, the LP was a critical and commercial disappointment. Midway through the "Eat The Heat" tour, differences between the band and Reece had come to a head, leading to the altercation between the singer and bassist Peter Baltes in Chicago. By the end of 1989, ACCEPT had hung it up.

Reece told Canadian rock journalist Mitch Lafon last year that he still looks back fondly on the "Eat The Heat" album. "You know what? It's weird, because the bad blood happened at the end of it, and I hated it — I hated everything about it," he said. "I knew it opened a bunch of doors for me, but… I, on a daily basis, get people telling me what that album means to them now. At the beginning, they hated me, but now it's, like, they have this rebirth of how great it is. And I listened to it the other day, and I went, 'That's a pretty dang good album for a first.'"