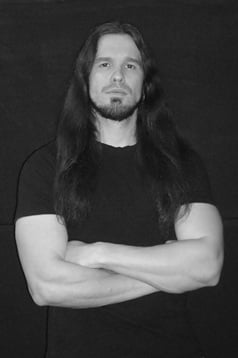 Former ANTHRAX vocalist Dan Nelson will head over to the West Coast soon to begin rehearsing with his new band BLACKGATES, also featuring drummer Paul Bostaph (TESTAMENT, ex-EXODUS, SLAYER, FORBIDDEN),guitarist Jeremy Epp (THE VENTING MACHINE) and bassist Uriah Duffy (WHITESNAKE). "[I] can't wait to get out there and jam with the guys," Nelson writes in his SkullsNBones.com blog. "We have a lot of ideas and tunes to work on. HEAVY stuff here."

Nelson previously stated about BLACKGATES's musical direction, " It's thrashy and heavy, so will appeal to ANTHRAX and TESTAMENT fans. But has the groove and brutality of PANTERA, and is also very melodic. The guitarist is a kid from the Bay Area named Jeremy Epp, who's an unknown, but sensational. People are gonna love him."

According to Nelson, he has also been working on his own music on his home turf in Long Island, New York with his drummer of the last seven years from INSIDE HOLLOW, Frankie Apicelli. Dan says, "The project will be called CHILDE OF HALE. The music is very dark, ala BLACK SABBATH/THE DOORS meets something pissed off at everything! [I'm] stoked to get that into everyone's ears very soon as well."