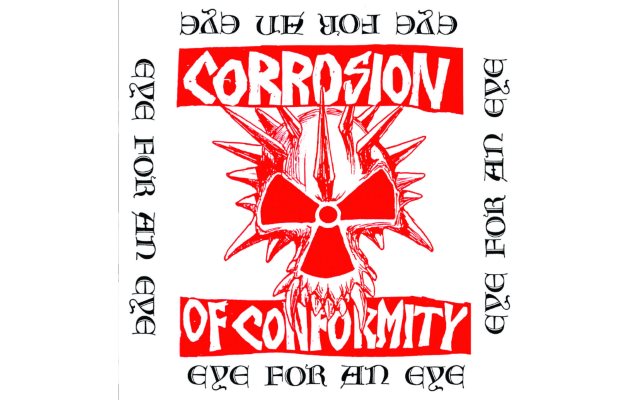 Eric Eycke, who sang on CORROSION OF CONFORMITY's 1984 debut album, "Eye For An Eye", has passed away.

Just prior to his death, Eycke had reportedly been in hospice with various maladies.

C.O.C. said in a statement that Eric's "broad musical knowledge shaped the band's early identity," adding that "[his] energy is evident on our first hardcore-era album, 'Eye For An Eye'."

"This simply does not seem real," the group continued. "We traveled far and wide in a shitty van, blowing up stages together, trying to live up to the likes of the BAD BRAINS and BLACK FLAG."

CORROSION OF CONFORMITY bassist Mike Dean told IndyWeek in a 2012 interview that Eric Eycke "was the kind of singer that people would be into hearing at that point. He was a hardcore kind of tough dude. Never could hear him; he would usually be running around and miss the microphone."

Eycke, who has been described as the most agitated, energetic vocalist C.O.C. ever had, said about his approach to the band's early live performances: "In Richmond, we opened up for HÜSKER DÜ. Then we opened up for DEAD KENNEDYS down at the Pier, and I had already heard about the DEAD KENNEDYS so I was kind of in awe. I was, like, "Damn, Jello's [Biafra] here." I remember we finished our set, and I walked off and he just looked at me and he was, like, 'Goddamn, blown off the stage again.' That always stuck with me. If that's what it takes, then yeah, I can do that."

Often characterized as a high-velocity hardcore record, "Eye For An Eye" was notable for including a punkified torching of JUDAS PRIEST's cover of Peter Green's "Green Manalishi". "It didn't really sound like us," CORROSION OF CONFORMITY drummer Reed Mullin later said about the album. "Well, we had done two or three songs at that place before, for the 'Why Are We Here?' compilation, the seven-inch. And that sounded pretty good, it sounded kind of like us because we were actually kind of heavy for that time. The only other hardcore band that was playing that stuff was VOID, I guess."

Eric, for his part, told IndyWeek that "Eye For An Eye" "could have been so much better. Reed was like a kid in a candy store. He went back in and he remixed it after-hours. We did our time; we went home at six. He came in at seven and worked until ten. That's how we ended up with that product, and no, I'm not happy about it. But it is what it is. If you like it, you like it."

"Eye For An Eye" was re-released in 2012 through Candlelight. This special reissue was remastered/packaged and included the EP "Six Songs With Mike Singing". Both titles has been out of print for years.

We are sad to learn of the passing of one time COC vocalist Eric Eycke, who's broad musical knowledge shaped the band's early identity. RIP pic.twitter.com/KuOn1i4eR2