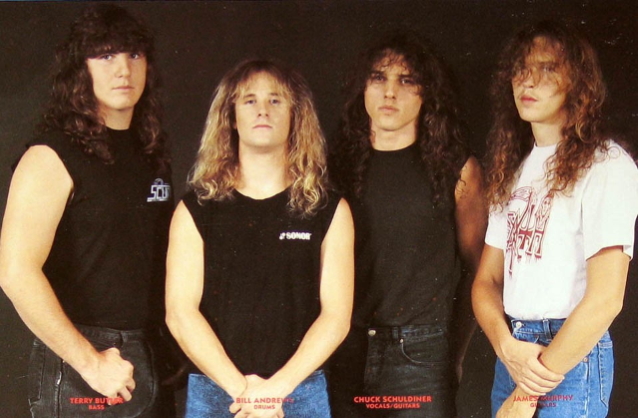 Former DEATH members James Murphy (guitar) and Terry Butler (bass) will perform the band's classic third album, "Spiritual Healing", in its entirety at two shows in Florida. The December 11 and December 12 concerts at the Brass Mug in Tampa — where Murphy and Butler will be joined by drummer Gus Rios (ex-MALEVOLENT CREATION, DIVINE EMPIRE) and guitarist/vocalist Matt Harvey (EXHUMED, GRUESOME) — will coincide with the 20th anniversary of the passing of DEATH mastermind Chuck Schuldiner.

Butler discussed the upcoming performances during an appearance on a new episode of "The Jasta Show", the video podcast hosted by HATEBREED frontman Jamey Jasta. He said (as transcribed by BLABBERMOUTH.NET): "[Former DEATH drummer] Bill Andrews was totally on board to do this, and he wanted to really do it. Unfortunately, because of the pandemic — he's in Japan; he's been living there for 20-plus years — the rules in Japan and so forth, and also his passport needs to be renewed, and it's so backlogged that he can't do it. But he was really torn up about it. But he's moving back to Florida. And he wants to get back into the scene and do some drumming."

He continued: "[Bill] actually started MASSACRE — him and Allen West. But he played on [DEATH's] 'Leprosy', he played on 'Spiritual Healing', he played on [MASSACRE's] 'From Beyond', he played on the 'Inhuman Condition' EP. He's just been out of the scene for a long time, but he wants to get back in."

As for what fans can expect from the Brass Mug concerts, Butler said: "We're gonna do 'Spiritual Healing' in its entirety. And we're gonna play three or four extra songs from the 'Scream Bloody Gore'/'Leprosy' era. The band that is opening is called SYMBOLIC. It's [former DEATH guitarist] Bobby Koelble, some of the guys from [the DEATH tribute band] DTA [DEATH TO ALL], and they're gonna play the DEATH stuff after 'Spiritual'. So it should be two great shows. And it's the first time me and James have been together on stage since 1990."