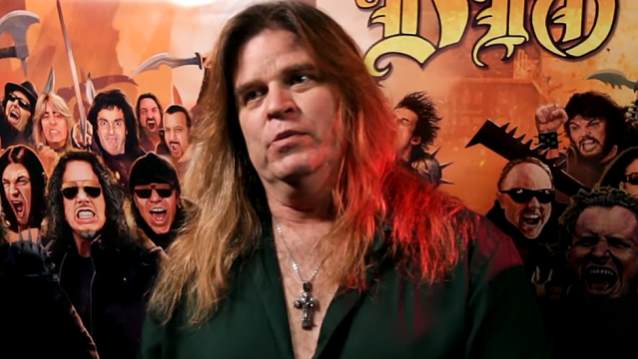 Ex-DIO guitarist Craig Goldy and former QUIET RIOT frontman Mark Huff have recruited bassist Dario Seixas (FIREHOUSE, STEPHEN PEARCY, CROWN OF THORNS, JACK RUSSELL'S GREAT WHITE) for their new project. Goldy says: "[Dario is] a very experienced and knowledgeable musician and quite multi-faceted, if I don't say so myself! He has lead-vocal capabilities, [is] a great player with great stage presence, writes great song ideas and is a very high-caliber person.

"As I have mentioned in several interviews, I wanted to put the 'holy shit' factor" back into the hard rock/heavy metal genre by getting virtuosos in their own right together in one band that not only look the part, but are also unusually and vastly talented and who are good human beings… and we can all agree on producing high-quality music together!! Now, that's not easy to do!! But I now have two out of the four that are necessary, and as I stated before, there is a keyboard player that I think is perfect for us, but we just haven't made it official as I have been advised not to put my 'eggs' in one basket just yet! Plus, the keyboardist position is going to be a highly skillful and unique objective in order to fulfill this endeavor in full, and these guys don't grow on trees!"

Goldy previously stated about the first two songs from his new project: "This is my own personal tribute to my mentor, friend, bandmate, family member and often 'father and brother figure,' Mr. Ronnie James Dio.

"I mentioned at his public memorial service that when I do some original material next that I will use what I have learned from him over the years in such a way that I could only hope to make him proud!

"This is meant also as a means of being therapeutic for those who still miss [Ronnie] as much as I do.

"The first song, 'Hole In My Heart', is about his passing from the perspective of the fans, the band that was left behind and myself. My hope is that this song will help with the pain that goes had in hand with losing a loved one of any kind, and be a musical memorial for Ronnie and all the lost loved ones everywhere!

"The second song, 'Dark Rainbow', is a song about Ronnie.

"When Ritchie Blackmore had left DEEP PURPLE and how he (Ronnie) seemed to come out of nowhere, when disco was taking the spotlight, and not only became unique unto himself, the music industry, fans around the world, but also became the voice for the 'downtrodden' and/or the 'black sheep' of the listeners of the entire globe. How he had to step down from being a headliner in SABBATH and become an opening act just to get his own band DIO going, and how he labored over his melody lines and lyrics hour after hour, day after day, week after week piecing together masterpieces, After he left this world, the 'black hole' (of music and him being the first and last of his kind),that black hole left behind is what I call the 'dark rainbow.' And that I didn't want him to go in there, because if he did, I would never see him again. This song is also for those hard rock/heavy metal fans that don't know about Ronnie like we do. For them, this song is about something inexplicable that came and went, something so powerful that it changed the world while it was here, and as a result of its departure, was left a daunting after-effect that the world will never ever forget in the shape of a physical black hole or doorway into another realm, that if ever entered into, one would never return."

Shortly after Ronnie passing in May 2010, Goldy, who served as DIO's guitarist for several different stints from 1986 through 2010, and appeared on such recordings as "Master Of The Moon", "Intermission", "Dream Evil" and "Magica", released a statement in which he called the singer "more than a legendary musician, friend and fellow bandmember, he was my family. He is the reason anyone really even knows who I am at all and why I exist. He rescued me from sleeping in a car on the streets of San Diego and Los Angeles and brought me into his world where dreams come true, kindness to strangers and fans, warmth, humility and integrity are paramount and where creativity could be without boundaries that could change people's lives forever. I know he changed mine. Not just through his music and the voice that turned his unique abilities into a legend, but who he was as a person and how he treated me and everyone he came in contact with directly and indirectly."

He added: "We will all ache for the music that could've and should've been. However, we will be eternally grateful for the music, the man and the legend that we were given for such a short period time."