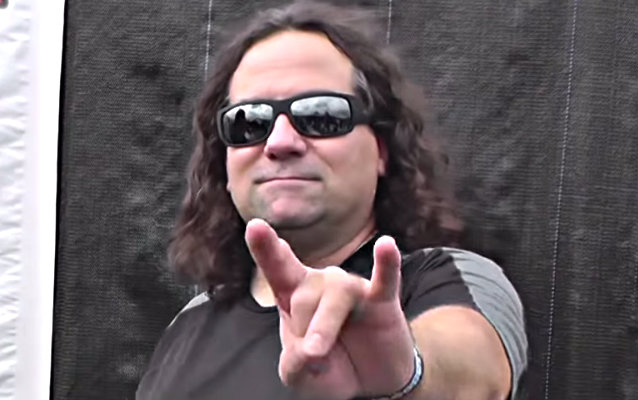 Former FLOTSAM AND JETSAM Drummer KELLY SMITH: 'I Had At One Time Considered The End'

Drummer Kelly Smith, who left veteran Arizona metallers FLOTSAM AND JETSAM in November 2014 to focus on caring for his family, has issued the following update:

"When I made my decision to step away from FLOTSAM, life was crushing me and my family, with crisis of family deaths (father-in-law [in August 2014], sister-in-law [in October 2014] and nearly [losing my] mother-in-law [in November 2014]),along with my family taking on two boys from another family member's addiction issues and my stepson's addiction issues to boot. We had a lot of weight and burden that was taking my focus on not only FLOTSAM but my and my family's own well being as a whole.

"Since my departure, I am happy to say that we are on the road to recovery from all of these. Mother-in-law has since recovered and moved into her new house after selling it during her bout with illness. The two boys are back with their mother after 12 months with us. My son is still working things out for himself. Send prayers for him.

"I am continuing to teach at the local Gilbert/Ahwatukee branches of School Of Rock as a drum instructor.

"As far as my future goes in metal, I do not see anything out there for me.

"I was born into FLOTSAM in 1982. I have tried to play in projects outside of that. Not sure I will ever be able to. My heart sits with FLOTSAM whether I am in the seat or not.

"During this last stint in FLOTSAM, I failed to take care of myself and for me became more of a burden to them than an asset. They may tell you differently, but my need to control can be very hard to live with for them as well as myself. They may have wanted me to stay, but I could no longer function as a sane person if I stayed. I had a lot of personal stuff outside and internally that was making life a burden for me.

"I had at one time in France considered the end. This was not a first-time thought, but it was becoming overwhelming. My sister took herself out in 2004 and occasionally I can feel her reaching for me.

"When I am in, I am all in 100%, holding nothing back. I take things very seriously and this time it nearly took me out for good. I had to let them go and for both our sakes. May seem dramatic, [but] to me, it was life and death.

"I was relieved when FLOTSAM decided to go with Jason [Bittner, SHADOWS FALL] as my replacement. He and I became friends after seeing him at Sounds Of The Underground in Phoenix 2009 with SHADOWS FALL. I think he will bring FLOTSAM to a level that the band hasn't seen in many years, with his impactful playing and the history of being with SHADOWS FALL and ANTHRAX (as a fill-in for Charlie [Benante]). He has clinical experience and a large public presence that I was never able to achieve in FLOTSAM or anywhere else for that matter.

"With the recent (2013) additions of Steve Conley and returning bassist Michael Spencer, they have been able to add material previously only written my one or two people in previous revisions of the band.

"I am waiting to hear the final tracks in 2015 with baited ears. I had a chance to go to the studio to listen to some of it while Jason is tracking.

"I am still a little tender there, so I chose to stay back and wait with all of you.

"I think it is said third time's a charm. So Jason it is!"

FLOTSAM AND JETSAM's 2015 European tour is scheduled to start in May and run through August. The trek will mark the band's return to Europe, coming off the heels of 2012's "Ugly Noise" album and last year's re-recording of the band's classic 1988 "No Place For Disgrace" LP.

Initially set to start in April, the tour was pushed out a month to May in order to allow FLOTSAM AND JETSAM time to continue writing material for the band's new album, which will feature new drummer Jason Bittner. At press time, the band will begin tracking its as-yet-untitled new effort later this month, with more European and U.S. tour dates to follow.