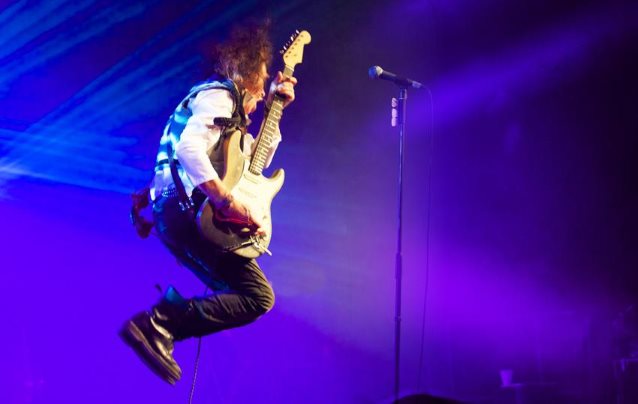 Following the success of his two recent crowd-funded albums, 2014's "Flowers & Dirt" and 2015's "Blackheart", former GILLAN guitarist Bernie Tormé has announced plans for a new album. "Dublin Cowboy" will be a triple album comprising a studio CD, an acoustic CD and a live CD. The album is scheduled for release in March 2017 and, again, fans are being asked to support the production and release of the album via a pledge-funding appeal.

The success of Tormé's two recent solo albums heralded the start of a real career renaissance for the guitarist. Both albums were assisted by highly successful pledge-funding campaigns that helped reconnect Bernie with long-standing fans as well as bringing new ones. "Dublin Cowboy" continues that renaissance.

Says Tormé: "When I made the last two albums, 'Flowers & Dirt' and 'Blackheart', I really loved the fact that I was able to be hands-on and communicate directly to fans. As an independent musician, that was a really positive experience — so much better than the past when the cold, dead, (and also pretty judgmental) hand of the corporate music industry (in the shape of a record company) laid over everything you tried to do. It was also really great being able to go out and tour 'Flowers & Dirt' and 'Blackheart'; we would not have been able to do that without getting a new album out through PledgeMusic and the crowdfunding process.

"We will be going out to tour 'Dublin Cowboy' in April 2017, after its release, and you can jam with us or just hang out: I can't wait to go out and tour the stuff we've been working on!

"The new triple album is called 'Dublin Cowboy', basically, because I am from Dublin! Not sure about the 'Cowboy' bit! I really wanted to do a 'big' album that gave me a chance to do lots of things that I had not done before, like the acoustic album. Doing an acoustic album really is a first for me, and I find that really exciting and a challenge; I've got some great really cosmic stuff planned for it!