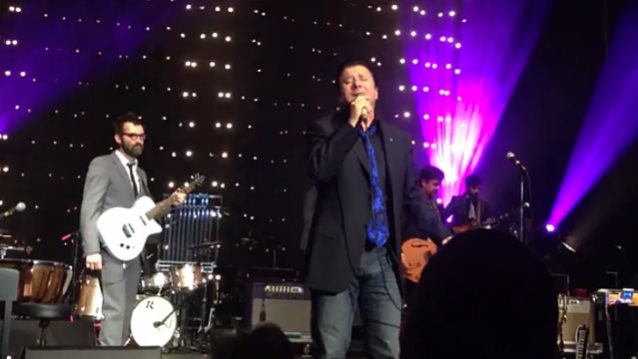 Former JOURNEY singer Steve Perry joined alternative rockers EELS on stage for the second time in a week — this time Saturday night (May 31) at Lincoln Theatre in Washington, D.C. where he performed four songs with the group. Fan-filmed video footage of his appearance can be seen below.

Perry — whose rumored return to JOURNEY has been the cause of rock gossip and band denials for several years — once again joined in on the EELS' song "It's A Motherfucker", which Perry had previously included on his iTunes celebrity playlist. He introduced the track by stating: "There is a song that really spoke to me. It is a song about profound loss. I recently lost someone who is the love of my life and I revisited that song. It meant even more to me."

Perry also touched upon how his collaboration with EELS came about, telling the audience: "For years we [Perry and Everett, EELS' singer and primary songwriter] have been friends. And for years, we have played croquet, we have gone to dinners, we hang out. 'Why don't you come out sometime and sing?' I haven't done it in a long time… I want to thank the EELS for getting my ass out and singing with them." Perry then covered Sam Cooke's "Only Sixteen" before delivering the same two JOURNEY classics — 1981's "Escape" power ballad "Open Arms" and 1979's "Departure" album standout "Lovin,' Touchin', Squeezin'" — that he performed with EELS on May 25 in Saint Paul, Minnesota.

Although Perry didn't attempt to hit the highest notes during his first appearance with EELS, Everett told The Wall Street Journal: "I like his voice better now. He's got that experience and grit… Steve is pure heart, and that's what I want out of an artist."

Perry's unannounced appearance with EELS in Saint Paul marked his first public performance since his last solo tour in 1995.

The singer told The Pulse Of Radio that the passage of time only further solidified his opinion of how incredible JOURNEY was during its heyday. "What a great band we once were," he said. "What a great band. I think the older I get, the more I'm able to look back at the forest now, 'cause I certainly walked out of the trees. I think everybody was just following their heart and their nose and following that lead. Just doing what we do. We're a band. We record, we rock, we instinctually reach for what we believe's a good idea — and argue about stuff, agree, disagree and move forward. And we were just crankin'."