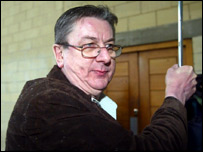 Former JUDAS PRIEST drummer Dave Holland (photo) revealed in a British court Monday (January 19) that he was bisexual, but denied claims he attempted to rape a special needs teenager while giving drum lessons, according to a British Broadcasting Corporationreport.

Holland, 55, of The Green, Stoke Bruerne, Northamptonshire, told Northampton Crown Court that he had thought the teenager was bisexual and had told him of his own bisexual background, but denied having any sexual motives for befriending him.

Holland said: "He was aware that I am bisexual. I believed that he was of the same persuasion as myself.

"He was very fond of me, the same as I was of him.

"He would even tell me I was his best friend. He would tell me that he loved me. It wasn't a sexual thing, it was affection.

"I know it is politically incorrect nowadays but kids like to be shown a bit of affection."

Nicola Cafferkey, representing Laouitaris, alleged that Holland had arranged the visits of her client and the teenager to instigate sex between the three.

Holland said: "Don't be ridiculous, madam, I resent the innuendo."

The trial was adjourned until Tuesday.