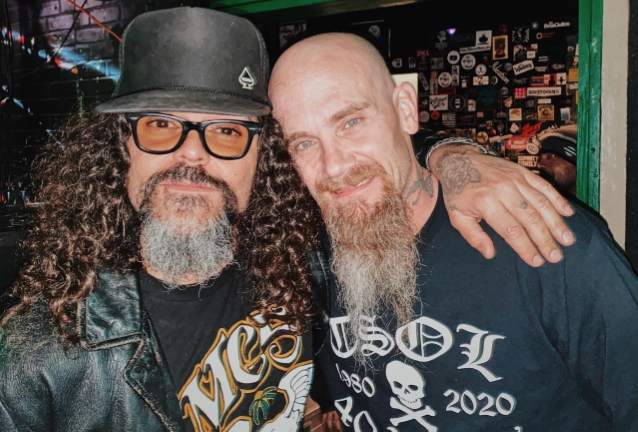 CDWA Records and the California Desert Wizards Association (CDWA) — known for their annual Joshua Tree live music festival/generator party Stoned And Dusted — will present a world premiere livestream concert film series highlighting the California Desert rock scene, "Live In The Mojave Desert: Volumes 1-5". Inspired by PINK FLOYD's "Live At Pompeii 1972" concert documentary film, the series will consist of five concert streams featuring five albums from five bands as well as including visuals by Mad Alchemy Liquid Light Show filmed and recorded from the natural amphitheater of California's Mojave Desert. Each event will last two hours which will include an hour-long "Couchlock And Rock" session featuring a chat hosted by the California Desert Wizards alongside special guests including bandmembers and icons from the California Desert rock scene — think if MTV in the '80s was run by heshers and stoners. The second hour will feature the 1080p HD livestream concert film experience.

"In October 2020, we filmed and recorded five bands in four days, deep in the deep sand and iconic rocks of the desert," shares "Live In The Mojave Desert" producer Ryan Jones. "It was a major undertaking to bring this many people and this much gear out to a very remote desert location. Including the bands, we had 25 people onsite daily. With only one road in, everyone and all the gear had to come up a half mile long hill of deep sand — 30 miles from nowhere. We had to hire local desert guys with huge 4x4 pickups to help. The Mad Alchemy Liquid Light Show projected on a four-story high, double pyramid of boulders and we had a crack squad of filmmakers, photographers and recording engineers there to capture it all. It was insane, but it was worth it to see our favorite bands play again!"

Tickets are on sale now at this location. Viewers can purchase individual tickets per event, which includes access to the livestream and video on demand replay, ranging from $10-$20 or purchase a Livestream Series Pass for $60 (a 25% savings) which allows access to all five events. In addition to virtual tickets, CDWA will offer physical merch pre-order options for CD, Vinyl and DVD for each "Live In The Mojave Desert" film. Stay tuned in the coming weeks for pre-order options.

To lend support to the live music industry following the impact of the pandemic, CDWA is offering an Affiliate Program which will give a portion of sales to participants (such as venues, promoters, independent artists, etc.) that sell tickets through a unique affiliate link.

"CDWA once again commits to the ultimate rock and roll experience for the fans and the bands regardless of what might stand in the way," says STONER's Brant Bjork (KYUSS, FU MANCHU). "COVID literally shut down live performance around the world... what do you do? You use your imagination, and you go all in. Congrats to CDWA and all the bands and crew involved in this rock and roll response of light in this year of concert stage darkness."

"I think that California Desert Wizards Association is doing a great thing and a new thing under the circumstances of COVID-19, because what I do for a living stopped cold, dead in its tracks," adds STONER's Nick Oliveri (KYUSS, QUEENS OF THE STONE AGE). "I feel the powers that be are trying to stop and kill music or live music and I believe Doctah Jones is doing a great thing by keeping it alive. We need more people like him coming forward. Let me add, what a cool original idea — a livestream while releasing a live record. For a collector like myself this is a great thing! Big cigars and cold beers to CDWA records. RnR will never die." 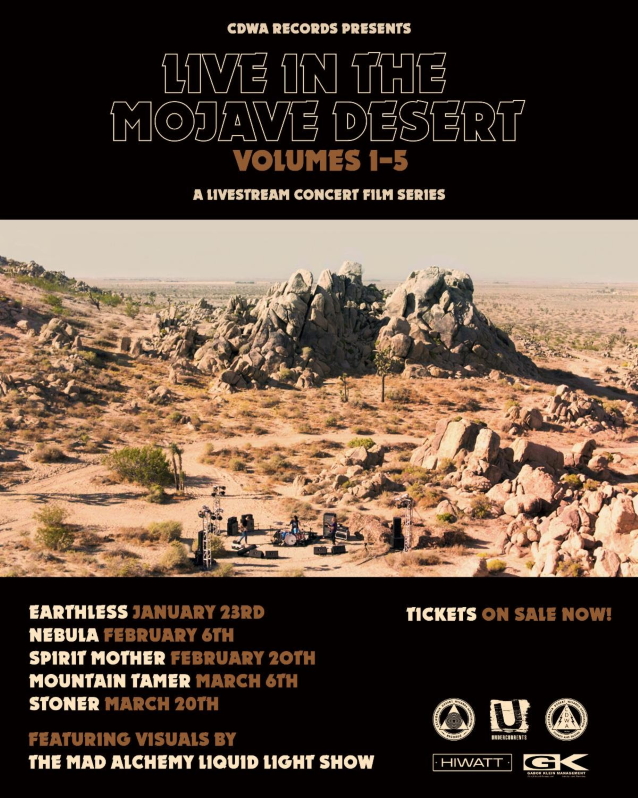