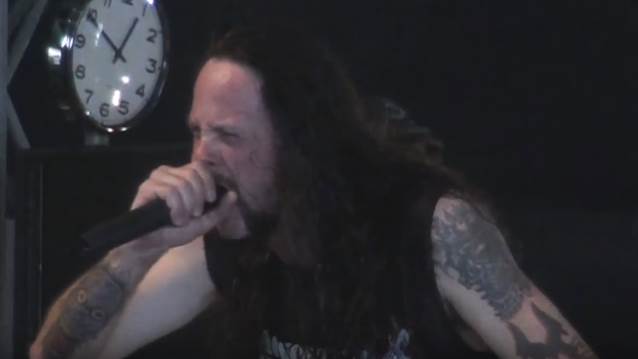 Former MALEVOLENT CREATION frontman Bret Hoffmann has died after a battle with stage 4 colon cancer. He was only 51 years old.

The news of Bret's passing was revealed by his wife, Kimberly Karan Hoffmann. She wrote on Facebook: "Today is the saddest day of my life. I just lost my soulmate, the love of my [life]. My best friend has passed away. I will always love [you], RIP, my love."

MALEVOLENT CREATION guitarist Philip Fasciana paid tribute to his former bandmate, writing on Facebook: "Can't believe my best friend/brother has passed away! 40 years of friendship and 30 years of playing music together. There will never be ever anyone I loved more than Bret Hoffmann and writing music and traveling the world with. He was truly the best friend I ever had and will miss him deeply. R.I.P. my brother!!!!!"

In a post on the GoFundMe page launched to help him raise funds for his medical expenses and treatments, Bret explained that he discovered that he had cancer after he went to a hospital emergency room because he was having "bad pains" in his legs and feet. "I work construction, and after a few weeks of this pain every day, my wife, Kim, took me to emergency room, and she was not taking no as an option. Well, come to find out the cancer was causing my T-cell count up and thickening my blood. I had an eight-inch clot in my right calf and some broke off and went into my lungs. The doctor told us if I hadn't come in that I would've certainly been dead by that next Friday from an embolism."

Bret also urged other men to get themselves checked for cancer. "Save yourself a waking nightmare of pain, uncertainty and mental twistedness," he said.

Bret performed on the first three MALEVOLENT CREATION releases until he left the band after 1993's "Stillborn" album. Five years later, he returned and performed on "The Fine Art Of Murder" and "Envenomed" before leaving again and being replaced by Kyle Symons. He rejoined MALEVOLENT again in 2006 and appeared on the group's last three albums, 2007's "Doomsday X", 2010's "Invidious Dominion" and 2015's "Dead Man's Path". He exited the group once again two years ago and was replaced by Lee Wollenschlaeger.

More recently, Bret has been involved with the FIRE FOR EFFECT project in which he was joined by guitarist and songwriter Gio Geraca (MALEVOLENT CREATION, ASHES OF ARES),bassist Tony Choy (PESTILENCE) and drummer Mike Smith (SUFFOCATION). Smith was later replaced by Derek Roddy (HATE ETERNAL, NILE, MALEVOLENT CREATION).

In a 2015 interview with Metal Rules, Bret was asked how he developed his unique vocal style. "When I grew up, I knew I wanted to sing," he said. "I was playing bass at first and I kind of sucked at it. I tried singing and sucked at it. So I went into my room for like two years and practiced singing old JUDAS PRIEST and IRON MAIDEN with [Bruce] Dickinson. I practiced those screams and could do them pretty good. Then when I transitioned over to death metal, it worked, because I learned the right way how to do those screams. It worked."