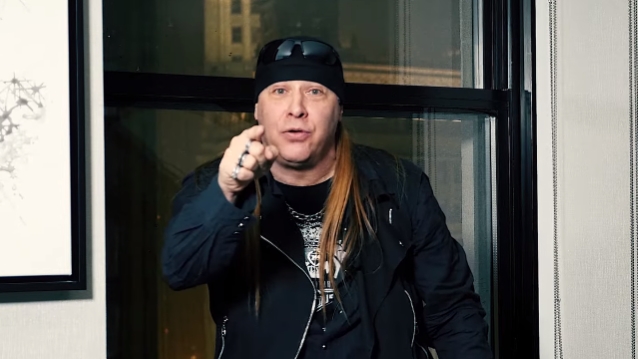 Former MANOWAR Guitarist DAVID SHANKLE Has Tumor In His Head

Former MANOWAR guitarist David Shankle is scheduled to undergo surgery next week after doctors found a tumor in his head during a recent brain scan.

Shankle revealed his health battle on March 23 in a post on his Facebook page. He wrote: "I have to deal with some serious medical issues. I have found out on Monday [March 18] that I have a tumor in my head and I have surgery scheduled for April 1st. Doctors are trying to get me in sooner. At this point, [it] is too early to talk about bening, or malign... we shall see.

"After five hand surgeries, [it] seems like nothing compared to this.

"I must kill this beast that is inside me and continue on like a Viking warrior that I am. I will never stop.

"I will win this new battle, the biggest one yet that is in front of me, and until then, please send me your best thoughts and positive energy because I need it.

"I will read all of your comments, but at the moment have no time to get back to you guys. Please respect that and don't feel bad if I don't get back to you shortly as I always do.

"My project with FEANOR doesn't change. The album is in the middle of the mixing process and you all can be sure of something... that record will be something really special, not only for me, but for all of you as well.

"Thanks all of you one more time for your immense love. You know that I love you all.

"Please send me your positive energy and let's fight this shit together one more time, back to back, like true brothers of metal."

David was a member of MANOWAR from 1988 to 1994, playing on the epic album "The Triumph Of Steel" and co-writing "Master Of The Wind", "The Burning", "Ride The Dragon" and "Demon's Whip". David left in 1994, after countless sold-out tours all over the world, and attended Roosevelt Music University in Chicago to improve his jazz and classical guitar skills.

Last fall, Shankle posted a statement on his Facebook page in which he revealed that he has composed the sequel to "The Triumph Of Steel' and that he was recording these songs with a band called FEANOR.

Announcement: Now for the BAD NEWS..
I have to deal with some serious medical issues. I have found out on Monday that I...