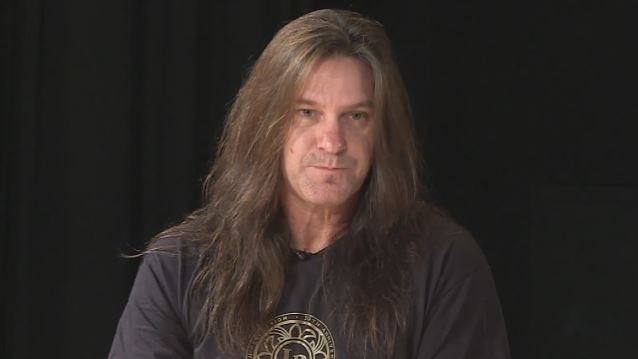 Former MEGADETH Drummer SHAWN DROVER: 'I Wanted To Preserve The Legacy Of The Band'

On October 21, Sweetwater editorial director Mitch Gallagher conducted an interview with former MEGADETH drummer Shawn Drover. You can now watch the chat below. (Note: The interview was conducted roughly one month before Drover and guitarist Chris Broderick announced their departures from MEGADETH.) A couple of excerpts follow (transcribed by BLABBERMOUTH.NET).

On what it was like, in 2004, to step into a band that already had such a long legacy and that had a so many rabid fans:

Drover: "For me, I mean, knowing the history of the band and stuff, I went in… And my brother [Glen Drover] was in the band [at the time], so I kind of got some insight to that as well — asking questions... Like a lot of fans, [I wanted to know], 'What's it like working with [MEGADETH mainman] Dave [Mustaine]?' So I kind of knew going in. And I'm not the type of person who's delusional to think that, 'Okay, I'm in MEGADETH. Now let's do the songs that I wanna do. And let's write a bunch of songs.' I went in there [with the attitude], 'Know your role and do your job.' That can apply to anything. I really went in there with that mentality, and it was a genuine thing. I wanted to preserve the legacy of the band. I wanted people to walk away from the show going, 'Wow! MEGADETH, even though they've got new guys, they're still a great band,' and I really feel that we did that.

"We're one of those bands… Some bands have the same four or five guys for their entire career; some bands don't. We are option B. We're just one of those bands. To me, things happen. We can talk about this for hours, about how many bands have changed key bandmembers and stuff. Again, I didn't think about… I just thought about it in terms of just, again, going in there and doing the job to the best of my capabilities, trying to make the fans happy and preserve the legacy of this band, and hopefully enhance it. I'm pretty proud of the accomplishments we've had in the 30 years [of the band's existence] and the ten years that I've been here."

On the changes in MEGADETH's sound as a result of all the lineup shuffles:

Drover: "It always changes. Musically speaking, of course, you can have five different drummers, which, essentially, is what MEGADETH has had, and even though we'll play a song pretty much the same way — pretty close — we all have our little nuances we have… So it's gonna change a little bit, and I'm totally cool with that; that doesn't bother me one bit. For me, I can't be a total robot and just play the songs exactly the way… If I find that something… Unless it's a real integral part of the song that you really should not change, you know what I mean? You wouldn't go into RUSH and change 'Tom Sawyer', you know what I mean?! And a lot of MEGADETH parts are like that as well, but there's certain nuances and things, rhythmic patterns that I'll change or do how I feel comfortable, because I need to have at least some way of expressing myself. Even though the fans probably don't even know it half the time, it makes me feel good to have my sensibility to what I interpret the song to be, even if it's just a small part. So that fulfills me musically, even though I wasn't on the track or wrote the track. So it gives me a feeling of… It just makes me feel good."

Only hours after Drover announced his exit from MEGADETH on November 25 to "to pursue [his] own musical interests," guitarist Chris Broderick revealed he also quit the legendary metal band, saying that he was leaving the group "due to artistic and musical differences." 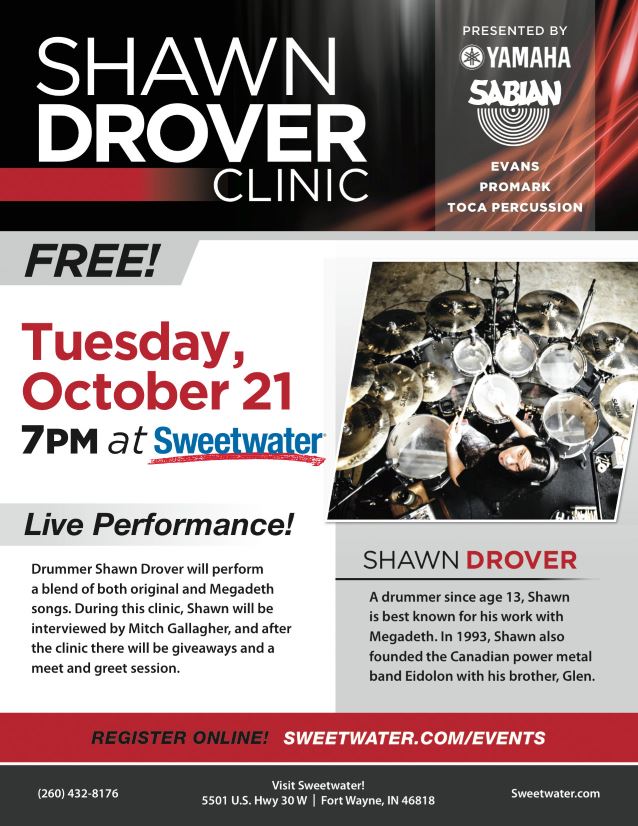