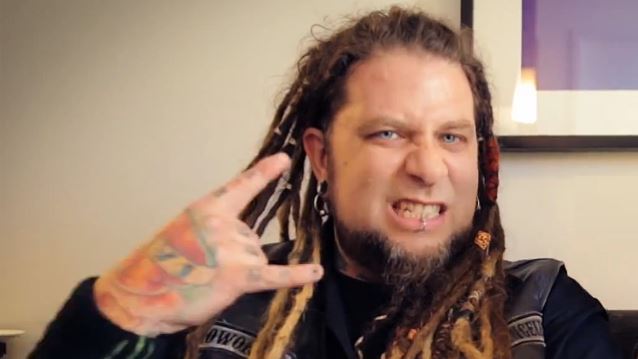 IN THIS MOMENT's CHRIS HOWORTH: Internet Makes It Too Easy For People To Get Negativity To Artists Who Bare Their Souls

IN THIS MOMENT guitarist Chris Howorth says that he "can't believe some of the things people say" about his band on the Internet, explaining that social-media sites like Facebook make it "way too easy for people to get negativity to the artists who bare their souls on their sleeves."

In an "opinion piece" for the All Axess web site, Howorth thanked IN THIS MOMENT's fans for making the band's fifth album, "Black Widow", the group's highest-charting effort to date and coming out to see IN THIS MOMENT perform live, saying that "we've grown so much so quickly and it's all due to our fans." He then went on to address the "rash of negative posts and hatred from people calling themselves fans and also from people who legitimately hate us," saying that he understood how his "band and music can evoke such strong emotion in people" because he was once "that kid who felt betrayed" by his favorite group.

He wrote: "Growing up, I had my favorite bands and followed them through all their ups and downs and different albums. I didn't always like everything they did and sometimes I even felt upset or slightly betrayed because a band did something I didn't like or agree with. If a band I liked changed the music, image, or a band member left, sometimes I even went as far as saying they 'sucked' or 'sold out' to my friends. Now that I am a man and on the other side of this, I realize how ignorant I was about the whole thing. I mean, who was I to think I should have any say or input in what a band creates? Why did I feel the need to trash talk someone's life's work just 'cause I didn't get it? In my mind, I was the center of the universe and how dare my favorite band change a member or try a new sound or direction… aren't they making music just for me? Me, me, me, me, me…"

Chris continued: "Reading the comments and rhetoric on news sites and even our own social media pages, I can't believe some of the things people say. People act like they are inside our heads and write three paragraphs detailing how we changed, why we changed and all this shit that they have absolutely no knowledge about. It's so freakishly personal to them, but to us we are just making our music, OUR art; and it's extremely personal to us…. because it is us."

Howorth went on to say that IN THIS MOMENT's new record label, Atlantic, "didn't have anything to do with what we created" for "Black Widow", explaining that "there was no pressure or guidelines from anyone other than ourselves."

The guitarist added: "I remember everyone being all up in arms when METALLICA put out The Black Album…or when they cut their hair. Man, people actually got upset that METALLICA cut their hair! How dare they?! Ha ha…. Personally, I didn't like 'Let's Put The X In Sex' by KISS (if you know me at all, you know KISS is one of my favorite bands) or a bunch of other stuff they did over the years, but at that time I would never have written them a letter or gone out of my way to let them know how I felt.

"The Internet makes it way too easy for people to get negativity to the artists who bare their souls on their sleeves."

Chris concluded his piece by saying: "In the end I really do appreciate everyone's passion, even the haters. (FYI ,your hatred makes us more popular, so thanks!) Passion is part of what drives all humans to learn, grow, create and dream. The lovers' and the haters' passion both drive me. I couldn't do what I do without ALL of you."

"Black Widow" sold around 36,000 copies in the United States in its first week of release to land at position No. 8 on The Billboard 200 chart. The CD arrived in stores on November 17.

IN THIS MOMENT last year inked a new deal with Atlantic, a division of Warner Music Group, following the completion of its contract with Century Media.

Read more of Howorth's opinions at All Axess.