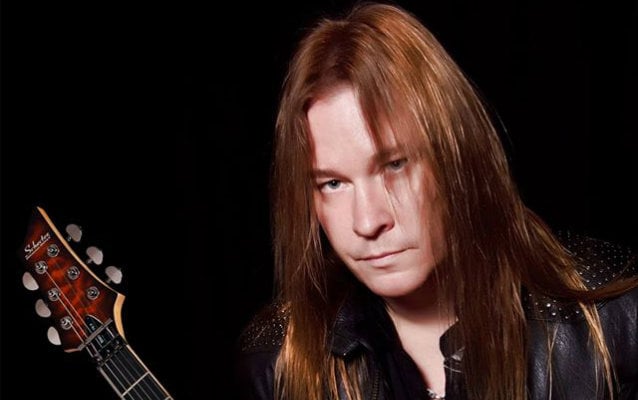 During a recent interview with the "American Made Guitar Show", Canadian guitarist Glen Drover (MEGADETH, KING DIAMOND) revealed that he was working on two new albums for a possible 2018 release. "One of them, which is a guest-singers album, as I call it right now — there's no title for it — is an album with, basically, nine or 10 songs with different singers from the industry," Glen said. "I've been working on it for quite some time, kind of on and off, and it's pretty close to being done now. But that's an album, like I said, just different singers. There's one track that has Chuck Billy from TESTAMENT on it, one has Todd [La Torre] from QUEENSRŸCHE, Henning [Basse] from FIREWIND. Just a bunch of really good singers, be it both buddies of mine that I met through my travels with the bands that I was in and became friends with or just singers that I really looked up to and really wanted to work with and hadn't worked with in the past."

According to Drover, the album will contain mostly original material with "maybe one or two covers," including his rendition of the ALICE IN CHAINS classic "Junkhead", featuring his brother Shawn Drover (ex-MEGADETH) on drums and Lance Harvill on vocals. Glen added that he is "really proud" of his version of "Junkhead", which can be streamed in the YouTube clip below.

As for the other disc, Glen said that it was "more like kind of like a follow-up to the 'Metalusion' album I did in 2011, which is all instrumental. I'd say it's about maybe halfway finished," he said. "Again, another album that I've been kind of working on here and there, working on when I feel like it. And when time allows, because some of the people that are involved, like Jim [Gilmour] from SAGA, who's finishing up some touring in Europe with SAGA, it's about when we all have time to do our parts and put things together and record and so forth. Yeah, that's an album that I don't know when it'll be finished. I'm hoping it's gonna be all completed and out by the summer of next year. I've been just kind of slow working on it, again not just because of our schedules and doing other things, but also too just really trying to take my time and making sure that I'm really happy with everything. The first one I did was done in the same nature, where it was done over a couple of years, and I'm very proud of that album. For me, it's my favorite recording that I've done with anybody, or have done, period."

Drover said in a 2015 interview that he quit MEGADETH due to "personal stuff… I wasn't really happy at the time there, in the situation. I wasn't happy in the band at that time, and I just felt like I was away from my family too much, which I was. You know, my son was very young. It's personal, but it's true. That's what happened. He was very young, and I was missing out on a lot of his youth. And being that I wasn't happy in the band at that point, it was magnifying that. And that's pretty much what it is."