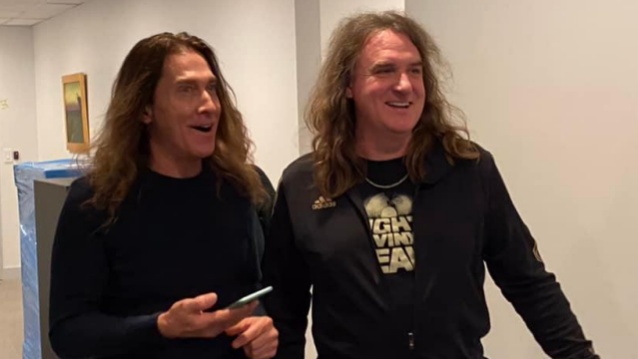 Former MEGADETH members David Ellefson and Jeff Young reunited last week in Los Angeles for interviews to be included in the upcoming feature-length documentary "This Was My Life: The Story Of Nick Menza". Ellefson has signed on as a co-producer of the film, and also will provide narration to guide the viewer through the exploration of the late MEGADETH drummer's life.

On Sunday (January 16),Ellefson took to his Facebook to share photos of him with Young, and he included the following message: "Was great to connect with Jeff Young this week while in LA doing interviews for the 'This Was My Life: The Story Of Nick Menza' documentary. Also many other friends, Mega staff and crew from over the years who gladly came together to share stories and fond memories of our beloved Nick."

Last September, Screaming Butterfly Entertainment announced a partnership with Ellefson and his Ellefson Films on "This Was My Life: The Story Of Nick Menza".

"This Was My Life" will be the first-ever film to memorialize Menza's legacy and celebrate his life exactly how it was. It is described in a press release as "an unflinching exploration into the life of one of the most successful thrash-metal drummers of all time, authorized by the Menza family. From his childhood all the way through to the end of his life including a true blow-by-blow account of the repeated failed attempts of the classic 'Rust In Peace' lineup."

"This Was My Life" will feature rare and never-before-seen photos and video footage from Nick's archived VHS tape collection, personally filmed by Menza himself from 1988 through 1991. Included will be exclusive content showcasing Nick working at the studio, personal home movies, casual time and party time with his fellow bandmembers, as well as other well-known artists of the era that Nick toured with. A screenshot from the film was recently released that featured an interview with former LAMB OF GOD/MEGADETH drummer Chris Adler.

Ellefson was fired from MEGADETH last spring after sexually tinged messages and explicit video footage involving the bassist were posted on Twitter. At the time, Ellefson was accused of grooming an underage girl through videos and online messages. David has denied the allegation and has repeatedly said the woman in question had been a willing, consenting adult at the time of their virtual sexual encounter. Ellefson accompanied his denial with an alleged screenshot of a statement from the woman with whom he was supposedly involved at the time. In it, the woman admitted to recording the alleged intimate communications she had with Ellefson and called herself "naïve" for sharing them with a friend without the musician's permission.

Was great to connect with Jeff Young this week while in LA doing interviews for the "This Was My Life: The Story of Nick…