Former METALLICA bassist Jason Newsted and his CHOPHOUSE BAND will play a fully electric setlist for the first time this Saturday, October 5 as the headliners of the inaugural J-Town Jam, a musical benefit concert supporting Little Smiles and Little Kids Rock. This special event will rock Downtown Abacoa Ampitheatre in Abacoa, Florida, starting at 4:00 p.m.

Newsted conceived The Chophouse Records Studio from other established acts and groups, to have a special place to play music on breaks and downtime away from rigorous touring schedules and agendas. Joining the all-star lineup for the event is JP Soars and the Red Hots And Moska Project. Emceeing the event is local celebrity and 20-year supporter of Little Smiles, Virgina Sinicki from the "KVJ Show". The event is sponsored by Conair Corporation, one of the largest and most diversified consumer products companies in the world.

Little Smiles is celebrating its 20-year anniversary of bringing joy and comfort to local children and their caregivers. This event will afford some Little Smiles children the opportunity to attend their first concert and meet Newsted himself. Tickets for this event are already selling quickly and are sure to sell out. Tickets on sale at this location. General admission: $25 VIP reserved seating: $50 (includes general admission ticket and reserved VIP seating) Meet and greet: $100 (includes admission ticket and VIP reserved seating; limited to 100 guests) and takes place at the Courtyard by Marriott at 3:30 p.m. This includes a personal photo with Newsted and reserved VIP seating.

Nearly six years ago, Jason shelved NEWSTED, the heavy metal project he operated between 2012 and 2014, saying that it cost him "an awful lot of money — hundreds of thousands of dollars." He added: "I couldn't continue because the business is such a harsh thing now and so different than what I had known." 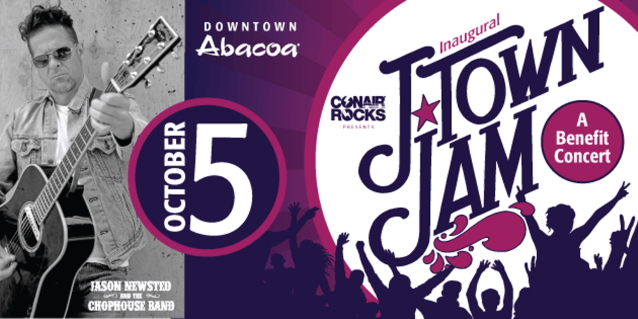 Posted by Taste and See South Florida on Friday, October 4, 2019