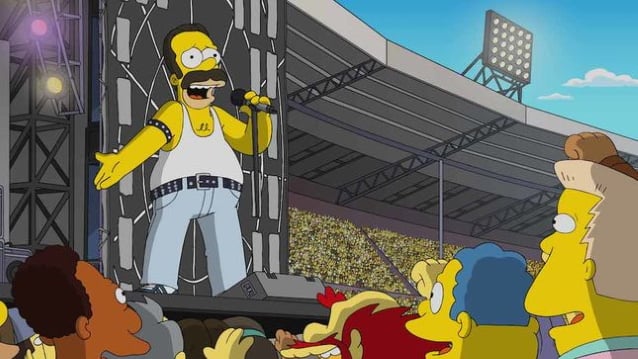 QUEEN's Iconic 'Live Aid' Performance To Be Recreated On 'The Simpsons'

This Sunday, October 6 on Fox TV in the U.S., you can see Homer and his family recreate QUEEN's legendary Live Aid appearance for the latest episode of "The Simpsons".

QUEEN's 17-minute appearance at the Live Aid benefit concert at Wembley Stadium has been referred to as the "greatest live performance of all time." The July 13, 1985 concert was set up to raise funds for the famine in Ethiopia and QUEEN delivered what was arguably the performance that stole the show. Led by Freddie Mercury, the British rock group delivered some of its biggest hits, including "Bohemian Rhapsody", "Radio Ga Ga", "We Will Rock You" and "We Are The Champions".

Event organizer Bob Geldof later said QUEEN was the highlight of the concert. Looking back at the day, he said: "QUEEN were absolutely the best band of the day. They played the best, had the best sound, used their time to the full. They understood the idea exactly, that it was a global jukebox. They just went and smashed one hit after another. It was the perfect stage for Freddie: the whole world. And he could ponce about on stage doing 'We Are The Champions'. How perfect could it get?"

QUEEN's Live Aid performance was recreated for the band's biopic, "Bohemian Rhapsody", which was released last year. The film has become the highest-grossing musical biopic of all time, bringing in more than $1 billion at the worldwide box office. This was despite a lukewarm reaction from critics upon release.

Because Wembley had been extensively remodeled since Live Aid, the filmmakers ended up shooting the sequences at Bovingdon Airfield outside London, where "Top Gear" is filmed.