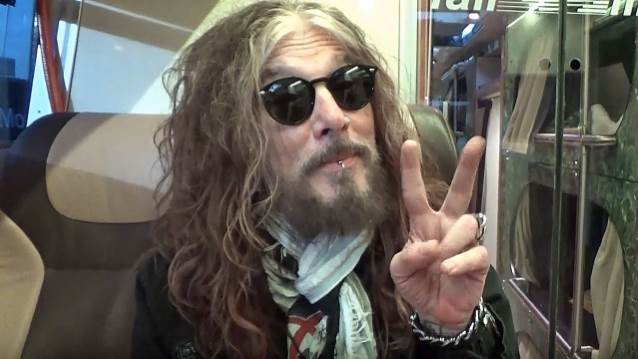 Former MÖTLEY CRÜE Vocalist JOHN CORABI: 'A Lot Of People Wrote Me Off When VINCE NEIL Came Back'

Former MÖTLEY CRÜE and current THE DEAD DAISIES vocalist John Corabi was recently interviewed by the Impact metal channel. The full conversation can be viewed below. A few excerpts follow (as transcribed by BLABBERMOUTH.NET).

On the lyrics of THE DEAD DAISIES' song "Resurrected":

John: "I think with MÖTLEY CRÜE, a lot of people wrote me off when Vince [Neil] came back. For me, 'Resurrected' is just like I'm saying, 'I'm still here; I'm still having fun; and I'm still going.' I think that one probably lyrically is my favorite [new song]."

On the song from his catalog that means the most:

John: "I could probably tell you if you picked any song in my entire catalog, all the way back to THE SCREAM, MÖTLEY, UNION, now with THE DAISIES, pretty much any song, I could probably tell you why I wrote it, what I was thinking when I wrote it. I think the one that resonates the most with a lot of people is from THE SCREAM album — 'Father, Mother, Son'. It's a slow song, but a lot of people write to me and say, 'Oh, my father passed away,' or, 'My mother passed away,' and that song is for some reason, it resonates with a lot of different people. That one is probably the one that I get the most response from."

John: "It's still odd to me, because I'm still a music fan myself. When fans come to me and they say, 'You're my favorite singer in rock music,' and I go, 'What about Steven Tyler?' 'No, I like you better.' 'What about Robert Plant?' 'I like you better.' That's kind of weird to me, because I'm like, 'No, dude — Steven Tyler and Robert Plant are gods.' It's weird for me as a fan to have a fan tell me that I'm their favorite singer. It's still a little awkward for me. I love to hear it, but I don't know how to respond to it. It's a very awkward thing to interpret what somebody else sees in me."

On the "most inspirational" people in his life:

John: "I would have to say my wife and my son, because they keep me grounded. I'm out here acting like a rock star, and then I go home, and my wife says, 'Take out the trash.' It makes you go, 'Okay, I'm home. Now, back to normal.' I have a great relationship with my son. He calls me every day. He's kind of figuring life out, and he'll ask me for advice, and I go out of rock star mode into dad mode and try to help him figure out his life. As far as music goes, I would have to say Paul McCartney, Robert Plant and Steven Tyler. I love those three. I think those three are probably the biggest influences on how I think about music."

On what he hopes to teach his son, who drums in his solo band:

John: "Nothing is easy. He gets very frustrated sometimes because — and it's very easy to do — you're on a course to do something, and you get a roadblock. It's very easy to stop and turn around and go back, or go in a different direction. If someone puts a wall in front of you, sometimes you just have to borrow a sledgehammer and break the wall down, and just keep going. The main thing I tell him is, life is not easy; you're going to make mistakes, and that's okay, as long as you learn from them. Do your thing; don't be put off; don't get distracted; work hard; and everything you want, you will have."

On whether he plans to write any music with his son:

John: "We're going to. I have some time off next year, so I'm going to try and do some shows with my [solo] band and start recording a new solo album. We'll see. My son's really very creative. He's a great drummer; he's got a very creative mind. I've seen some lyrics he's written, and it's actually pretty good, but it tends to get a little dark. I like trying to find the happy endings in everything. I would love to write a song with him. It'd be awesome."

On wanting to write for other artists:

On his guiding beliefs:

John: "I believe in treating people the same way you would want them to treat you. I know sometimes war, it's a necessary evil, but I don't believe in it. I believe in spirituality, but I don't believe in organized religions, because I think they're all just money-grubbing... most of the people that go to church to pray are in need of something, and the church takes their money. Most churches — maybe not all; I can't speak for all churches. I believe in being kind to people, and being a good person. If everybody was kind to each other, the world would be a better place."

On February 16, Corabi released a live album of his performance of MÖTLEY CRÜE's entire 1994 self-titled album, recorded on October 27, 2015 in Nashville, Tennessee. "Live '94: One Night In Nashville" documents the album in its entirety along with the bonus track "10,000 Miles", which was originally released as a bonus track on the Japanese version of the "Quaternary" EP.

THE DEAD DAISIES released their new album, "Burn It Down", on April 6 via Spitfire Music/SPV.