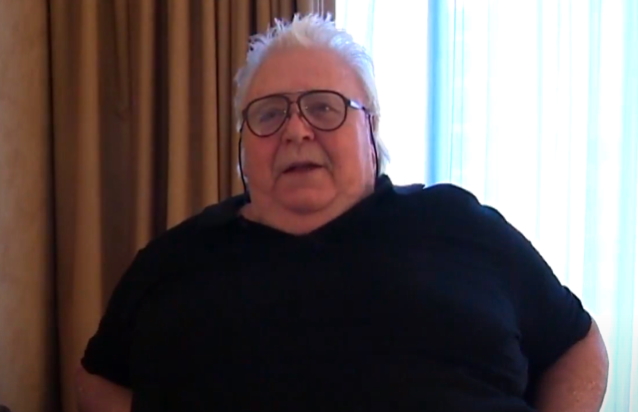 Former OZZY OSBOURNE and URIAH HEEP drummer Lee Kerslake has died after a long battle with cancer. He was 73 years old.

"It's with the heaviest of hearts that I share with you that Lee Kerslake, my friend of 55 years and the best drummer I ever played with, lost his battle with cancer at 03:30 this morning," Kerslake's longtime URIAH HEEP bandmate Ken Hensleywrote on social media. "He died peacefully, praise The Lord, but he will be terribly missed."

URIAH HEEP guitarist Mick Box wrote on Facebook: "Lee was one of the kindest men on earth, as well as being a brother he was an incredible drummer, singer and song writer! He had a passion for life bar none and was much loved by the fans, as well as anyone who crossed his path!"

In January 2019, Kerslake was inducted into the Hall Of Heavy Metal History in Anaheim, California. During his induction, Kerslake was presented with two platinum discs for his work with the BLACK SABBATH frontman. The presentation was filmed for Kerslake's documentary.

During an interview with The Metal Voice in December 2018, the drummer revealed that after all these years, he just wanted platinum album certifications for both "Blizzard Of Ozz" and "Diary Of A Madman", so he can feel some acknowledgement for his work before he dies.

Kerslake had since been granted his wish as Ozzy shared a photo on social media of Lee sitting on a sofa and holding the "Blizzard" and "Madman" platinum discs, a handwritten letter from Ozzy placed on his chest.

Kerslake and bassist Bob Daisley had been embroiled in a legal battle with the Osbournes for many years, which had taken a massive financial toll on the drummer.

In the December 2018 interview, Kerslake told The Metal Voice that his prostate cancer had spread to the rest of his body. "I have now have bone cancer, which is a nasty one, so the doctor gave me about eight months to live," he said. "But I've been fighting all the way. Five years ago, they gave me four years to live, and so that gives you an idea."

Kerslake had been working on the aforementioned autobiographical documentary as well as a new album called "Eleventeen".

Lee was one of the kindest men on earth, as well as being a brother he was an incredible drummer, singer and song...

RIP LEE KERSLAKE. Lee was a dynamo of a drummer who drove Uriah Heep through their heyday like a Crazy Train. He propelled Ozzy’s original band the same way. When last in London he came to visit although ill. A lovely man who fought cancer to the end with a smile. Rest My Friend https://t.co/P1sqpxrtp5