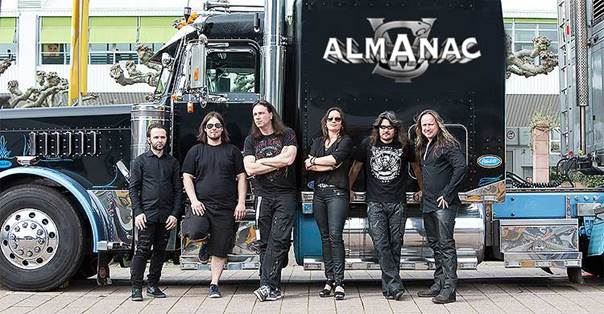 ALMANAC, the new band led by former RAGE guitarist Victor Smolski, has inked a deal with Nuclear Blast. He says: "After ten years of cooperation with Nuclear Blast, a friendship evolved. Nuclear Blast trusted in me a lot for my work as composer and producer of the NUCLEAR BLAST ALLSTARS'Into The Light', RAGE and LMO records. Because of that, I will continue with my new band ALMANAC together with the established team of Nuclear Blast."

He adds: "I hope that our previous successes will continue with ALMANAC."

ALMANAC sees Victor pursuing his passion for neo-classical and orchestral metal, and continues on the path that the guitarist embarked on with the LINGUA MORTIS ORCHESTRA debut, "LMO".

The recording sessions for ALMANAC's debut album will begin later this year. Victor says: "Everyone who liked my LMO songs and the RAGE songs I wrote in my 15-year membership, like 'Soundchaser', 'Down', 'Suite Lingua Mortis', 'Forever Dead', 'Straight To Hell', 'Empty Hollow' and many more, can look forward for the new ALMANAC songs. I'm totally motivated to present you our new album with such an amazing lineup in 2016!"

ALMANAC made its live debut during this year's Musikmesse trade show, which was held April 15-18 in Frankfurt, Germany. Video footage shot at the event can be seen below.

The current line up of ALMANAC: