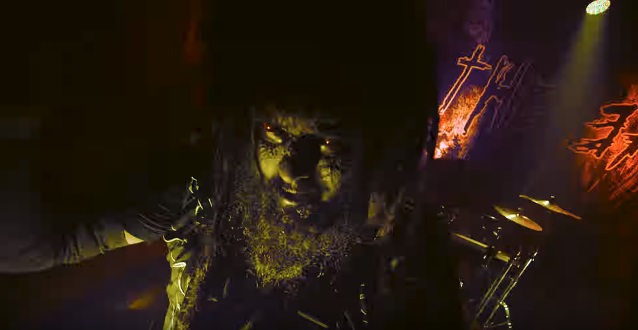 SCUM OF THE EARTH — the band led by former ROB ZOMBIE guitarist Mike Riggs — has released the official music video for a new song called "Dance Motherfucker". The clip was produced by Riggs, shot and edited by Chris Canote of Canote Films, and features makeup by Nathan Shelton.

Says Riggs: "It's been a while since we've released new music, and I know that you've been waiting for new SCUM OF THE EARTH, as it marks the band's 13-year anniversary. So, with that being said, we give to you our newest single, 'Dance Motherfucker'! More new songs and videos are on the way! Here's to 13 more!"

SCUM OF THE EARTH's third album, "The Devil Made Me Do It", was released in August 2012 via Goomba Music, Inc. (with distribution through eOne in North America). Produced by Riggs and Volkstoker, it was recorded at Scum HQ in Branson, Missouri and was the follow-up to 2007's "Sleaze Freak" (Eclipse Records).

In a 2012 interview with Bloody Disgusting, Riggs stated about the connection between his music and horror: "I think it just happens. It's what I've been into since I was a kid. I think about it on a day-to-day basis. [Laughs] I write a song and then think, 'Ooo, lyrics.' Just all I can think of is… I don't know. I don't try to make it sound like any way. It's not preplanned. I get the music done and then, 'That sounds cool!' and then just sit there and sing along to it. Probably growing up in the Bible Belt helped in that direction. It's not like I get up in the morning and put on my face paint and go to Walmart and say, 'Hey, I'm the evil security guy!' I'm just a normal dude who is into the horror stuff."

SCUM OF THE EARTH is: