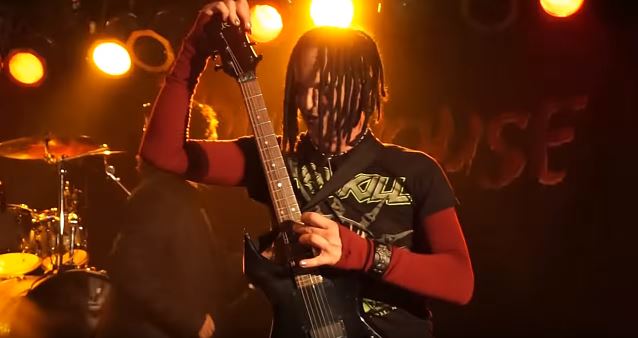 Ex-STATIC-X and DOPE guitarist Tripp Eisen — whose real name is Tod Rex Salvador — rejoined his former bandmates in ROUGHHOUSE (formerly TEEZE) on stage this past Saturday, October 15 at the Savfest at Whiskey Tango in Philadelphia, Pennsylvania. The concert was a benefit for people suffering from depression and mental health issues, raising suicide awareness and showing support for those who have lost a loved one to depression and suicide.

Video footage of ROUGHHOUSE's first performance in 14 years — courtesy of Totally Driven TV — can be seen below.

Formed as TEEZE in 1983, the band changed its name to ROUGHHOUSE in 1988 and released its Max Norman-produced self-titled debut album later that year. In 1989, ROUGHHOUSE broke up but reunited for some shows in 1992 and 1993, and again in 2002.

Eisen has kept a low profile for nearly a decade since being paroled from the Mid-State Correctional Facility and being released from custody in April 2007 after serving time for allegedly meeting and sexually assaulting a 14-year-old girl in January 2005.

Eisen was arrested in Orange County, California in late February 2005. The then-39-year-old musician allegedly met the Sayreville, New Jersey girl on the Internet, drove from Pennsylvania on January 7, 2005 to meet her, and assaulted her in a shopping center in Old Bridge, New Jersey. The girl's mother found out about the incident and alerted police.

In a separate incident, Eisen was arrested on February 10, 2005 on one felony count of crimes against children. Authorities from the Orange County (California) Sheriff's Department found the musician sleeping in a parked car with an underage female with whom he'd just had sexual intercourse, according to Bergen, New Jersey's The Record. Eisen was taken into custody and released on $100,000 bail several hours later.

Steve Meister, Eisen's defense counsel for his California criminal case, told MTV.com back in 2005 that the guitarist accepted the terms of a plea bargain on June 24, 2005. "He acknowledged his responsibility," Meister said, and pleaded guilty to two felony counts of engaging in unlawful sex with a minor. He was sentenced to a term of one year, but because he'd been in custody since late February, "[Eisen] had substantial custody credits" and wound up "serving just a couple of months."

"The [California accuser's] credibility was very shaky," explained Meister. "She told people she was anywhere from 14 to 19. She told a cop one age, a detective another, [Eisen] another. She met him at an 18-and-older club, so she either had a fake ID or lied to the bouncers. We weakened the prosecution's case, but really, [Eisen] had a reasonable, good-faith belief that she was an adult."