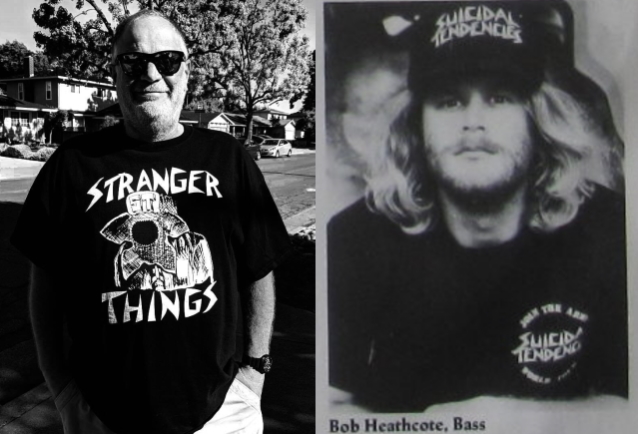 Former SUICIDAL TENDENCIES bassist Bob Heathcote has died at the age of 58 from injuries sustained in a motorcycle accident.

Bob's passing was confirmed by his son Chris Heathcote, who wrote on his Facebook page: "My father Bob Heathcote has left this earth after 58 years and nearly two months, due to a motorcycle accident. I cannot put words together other than the fact that this is a loss I will hardly recover (if ever),and the fact that he was a hard working father who raised five children, including me. His interests included music, traveling, race cars and attending race tracks. He was also a supporter of the Dodgers.

"In addition to his work in the technology and photography industries, dad gained a bit of publicity in the late 80's as the bass player of the legendary punk/metal act SUICIDAL TENDENCIES. His tenure with S.T. lasted for just one album, the Epic Records release 'How Will I Laugh Tomorrow When I Can't Even Smile Today', which spawned the hits 'Trip At The Brain' and the title track 'How Will I Laugh Tomorrow'. Those two songs garnered airplay from 'Headbangers Ball' on MTV and active rock radio stations, including the defunct legendary Long Beach-based radio station 105.5 KNAC. After that album, he left S.T. and the band would replace him with future METALLICA bassist Robert Trujillo.

"Each and every moment I've shared with my dad will forever remain as a treat.

"Thank you dad for everything you did for me and my family. I will miss not only your keen sense of humor, but you and me doing a lot of things we loved doing together, including talking about or listening to music, traveling, going to the beach, going to Mexican restaurants, attending Dodger games, etc.

Back in 2009, Bob told the Suicidal Maniac blog about how he came to join SUICIDAL: "Amery Smith and I went to school together in Westchester, California. I remember one of the first times I played with Amery: after school I took the public bus with my bass and a small amplifier, pushed along on my skateboard, to Valor's place in Playa Del Rey. At the time he was playing his sisters drum kit. Just the two of us played for years, on and off with Rick Battson and other guitarists. After Amery joined SUICIDAL TENDENCIES and made the first record, they went on the road. Later I traveled a bit with him and the band myself as sound engineer. Professionally, I had been doing live sound, engineering seemingly forever for many bands around Los Angeles, more than playing bass. My first real engineering gig was the big show at the Olympic Auditorium where SUICIDAL TENDENCIES was the headliner over RED HOT CHILI PEPPERS and many others. That show was an eye opener for me and my introduction to the punk scene, really. As for my own playing, I liked playing with Amery and Rick Battson but it never went anywhere professionally. Really, we never tried to do anything except practice in that old garage. We always seemed to be looking for a singer to come along to give us direction. Later, though I cannot remember how we met, I started playing a lot with Rocky George in a cover band playing songs by the SCORPIONS, JUDAS PRIEST and MOTÖRHEAD. Rocky inspired me because he didn't play just rock/metal. We listened to a lot of jazz and fusion and Frank Zappa. I played a lot with Rocky along with Sterling Roberts on drums. One day I heard ST were looking for a new guitar player for their second record and I told Rocky he should audition. A few days later Rocky was in the band. Soon after Amery Smith and Todd Moyer were doing this project called UNCLE SLAM and I worked with them for maybe six months doing pre-production for a record. Mike Muir heard our tape and got us a record deal. I was very happy to finally get to have a chance record for myself in a real studio. But then just a couple days later Rocky called me and asked if I was interested in playing with SUICIDAL TENDENCIES because Muir wanted to cut Louichi. They were due to start recording two days later. Studio time was booked, and I had to make a decision immediately. I told Rocky I was interested in learning more and he said I had to talk to Muir. At the time I was playing bass a lot at night but I was also supporting my family with a regular 'day' job. I was married with one child (who is now married herself) so I had to get the details from Muir and be sure he was going to be able to pay enough for my family. Here I was at a crossroads where I had never toured, never recorded, and I might have to refuse my dream job if there was not enough money. I could not leave my family homeless while I went on the road. So I had to talk to Muir. I went down to see Muir where he lived, the Streets Of Venice skate shop on Lincoln, and sat with him in that upstairs room you see in the 'How Will I Laugh' video. We talked for maybe three or four hours. He said he could pay me (just) enough but he seemed torn by whether he really wanted to cut Louichi Mayorga from the band. He kept explaining to me why Louichi had to go, which I really didn't care about. I just wanted to hear him say, 'You are the new bass player for SUICIDAL TENDENCIES.' Finally, he did. What was really strange and something I will never forget is finding Louichi waiting downstairs when I came out of the room. Someone must have called him and told him I was talking privately with Muir. Louichi asked me what happened upstairs, and I told him, 'Well… I'm in, and you are out.' He heard it from me first. I still regret telling him that way. He was always a really nice to me but I didn't want to lie to him. I just did not know what else to say."

Asked what the best moment was that he had with the band, Bob said: "When Mike said I was in the band and told me what time to meet him at the studio the next day, I was pretty happy, especially as my wife supported me even if it mean some hardship for us. SUICIDAL TENDENCIES and I played some great shows in the U.S. and Europe, and some really bad ones, too, where there were no fans at all because someone screwed up the advertising/promotion. The best in Europe were probably the shows in Paris and Milan, the latter I think at the Rolling Stone club. I was sick as a dog but I remember the fans were great so I worked hard for them. The Royal Academy in London was a really great show, too: huge stage and lots of fans. Holland and Belgium were also excellent. Mike Clark was my roommate for nearly an entire year at every hotel. He and I got along great and would jam a lot and talk about future projects. It was the first real professional tour for both of us and we had a lot of fun together. I regret not staying in touch with him after I was cut."

As for the worst moment he had with the band, Bob said: "A low point, of course, was when the weasel manager called me on the phone to say my services were no longer required, especially because we were about to start working on a new record and I wanted to share my new 'bass voice' Louichi had done and Robert Trujillo would later do. Another bad memory: I felt really bad for getting the drum tech in trouble when we landed at the Heathrow airport which ended with him getting deported back to the U.S. and missing the whole European tour. Later I learned he was trying to enter the country as a tourist without a work permit and me calling his out name at the customs counter started an investigation. If someone would have told me ahead of time, it never would have happened. The worst show was probably Belfast where the fans spit on us to show their approval. There was, of course, also a bomb scare, and the hotel was like a scene out of a war movie with bunkers and obstacles in the driveway to prevent someone from driving up to the lobby with a car bomb. All the shows in Germany were horrible because the promoter pulled out and no one knew we were even there. That was painful. And we were booked for a lot of dates in Germany. The beer was good, though."

My father Bob Heathcote has left this earth after 58 years and nearly two months, due to a motorcycle accident. I cannot...