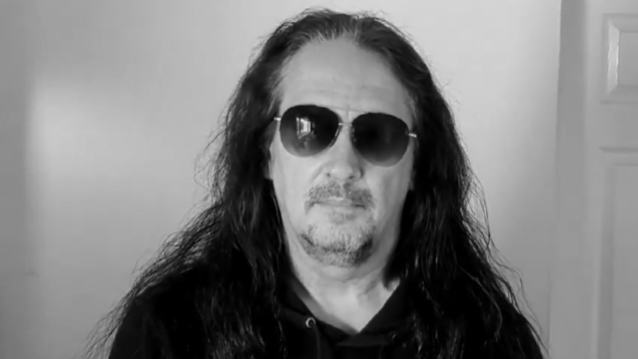 Former VENOM and VENOM INC. drummer Abaddon (real name: Anthony Bray) has completed the first round of chemotherapy in his battle with lymphoma.

The 62-year-old musician, who revived his ABADDON project in 2018, released a short video message earlier today in which he updated fans on his health. He said: "As some of you may know, I haven't been very well recently. I've been having chemotherapy for lymphoma. I'm getting the second cycle next week. I'm having one every three weeks for six cycles."

Bray previously said that his cancer journey began after he noticed a mass growing on the side of his neck in July 2022.

"I thought it was maybe an insect bite as I live near the sea and it was a hot month here," he shared in a recent Facebook post. "The mass grew bigger and, urged by my wife Rachel, I went to see my [general practicioner] who reassured me that it was most likely not cancer because cancerous lumps don't come up over night usually, rather they take a longer time to grow."

Although Bray's doctor was initially not too concerned, he still referred the drummer to see a specialist.

"He did some tests then sent me straight away for a biopsy, I had three samples taken and then went back to see my specialist who said that sadly it was lymphoma a cancer of the blood," Bray wrote. "He sent me immediately for a CT scan and an MRI scan which showed that I also had cancer in my bowel and lower intestinal tract."

Abaddon was part of VENOM's classic lineup from 1978 to 1992. He then returned to the band in 1995 and stayed with them for four years before joining VENOM INC. alongside fellow former VENOM members Jeff "Mantas" Dunn and Tony "Demolition Man" Dolan. VENOM INC. released its debut album, "Avé", in August 2017. A year later, VENOM INC. revealed that it was recruiting Jeramie Kling of the Tampa-based melodic death metal band THE ABSENCE to fill in for Bray on a European tour while Abaddon stayed home to spend time with his newborn daughter. VENOM INC. has since completed several tours with Kling and released a second album, "There's Only Black", without making any announcements about Bray's possible return to the group.

ABADDON released its latest EP, "All That Remains", in May 2022.

Let's send him our best wishes and positive vibes. He was in great spirits.