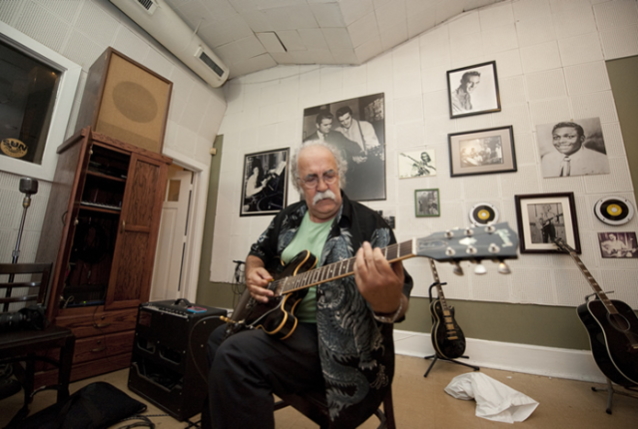 Manny Charlton, a founding member of the Scottish hard rock band NAZARETH, has died at the age of 80. The guitarist's death was confirmed by his grandson Jamie Charlton, who shared a photo of him with Manny on social media and captioned it, "RIP Grandad".

Charlton is famous for the guitar riffs that catapulted NAZARETH to stardom during the 1970s. He played on, produced and wrote most of their greatest hits, including "Broken Down Angel", "Bad Bad Boy", "Hair Of The Dog" and countless others, not to mention producing the prototype rock ballad "Love Hurts", which was a Top 10 hit around the world in 1975 and stayed an unprecedented 60 weeks in the Norwegian chart.

In a 2012 interview, Charlton stated about "Hair Of The Dog": "What that album did was set the band up for American success forever. Looking back, I'm still trying to understand why it was so successful. I've come to the conclusion that it's all about the attitude of the songs, performances and the rawness of the production. This was the first album that I produced for the band. Beginner's luck, you might say."

In 1986, Manny was brought in to produce GUNS N' ROSES' debut album, "Appetite For Destruction". Charlton ended up helming GN'R's 1986 Sound City demos that eventually received an official release on the 2018 "Appetite For Destruction" box set. As Manny told Legendary Rock Interviews a decade ago: "Axl's [Rose] favorite singer is [NAZARETH frontman] Dan McCafferty. He said to his label, 'Get me the guy who produced 'Hair Of The Dog' by NAZARETH.' What Axl wants, Axl gets.

"We left it saying, 'If we could get our respective schedules together, then great,'" he continued. "I was in the middle of recording 'Cinema' with NAZARETH and it didn't happen."

Image courtesy of THE FLUFFY JACKETS