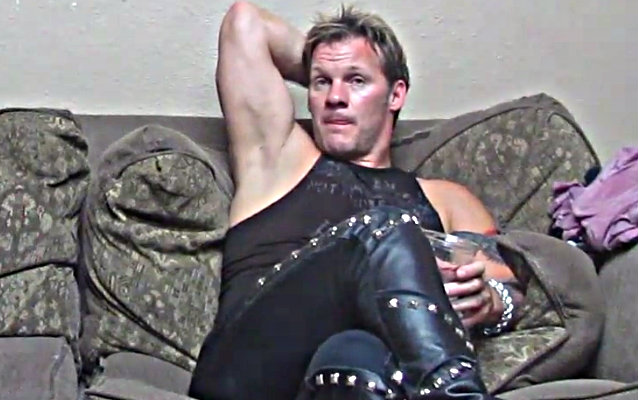 FOZZY's CHRIS JERICHO: Being On 'Dancing With The Stars' Was 'A Real Great Experience And Exposure For Me'

On September 19, Jay Nanda of the San Antonio Metal Music Examiner conducted an interview with FOZZY singer and WWE wrestling superstar Chris Jericho. You can now watch the chat below.

Asked about how he transitioned from the wrestling ring to the dance floor on season 12 of "Dancing With The Stars" in 2011, Jericho said: "As far as being in front of people, fine, but what I was doing in front of people I'd never done before in my life; I'd never danced before. And they had asked me on two other occasions to do it, and I said no. It wasn't until [former 'Dancing With The Stars' contestant] Stacy Keibler called me and and said, 'You've gotta do this.' Stacy and I were pretty close for awhile. She was, like, 'I keep telling ya, telling ya, telling ya.' And so I said, 'If I don't do it now, they'll never ask me again. I'll trust her judgment, so I'll give it a try.'"

He added: "Dancing is… You've gotta be light on your feet, you've gotta remember choreography, as well as wrestling. You've gotta understand a beat; syncopation and rhythm, that's all singing. So it was a combination of what I've been doing the last 20 years, 30 years. And I ended up doing okay at it. And [as far as the] fan base [is concerned], if five million people watch you a week on 'Raw', for example, twenty-five million people watch 'Dancing With The Stars'. And Hollywood doesn't really care about wrestling, for whatever reason. You do 'Dancing With The Stars' for a couple of weeks, and you're on 'The Tonight Show', you're on 'Ellen', you're on 'Entertainment Tonight', all those things. So it was a real great experience and exposure for me. It increased the fan base. And also just learning a whole new art form, which was really, really hard, but well worth it."

FOZZY's new album, "Do You Wanna Start A War", sold around 5,600 copies in the United States in its first week of release to debut at position No. 54 on the Billboard 200 chart. The CD, which was produced by FOZZY guitarist Rich Ward, was released on July 22 via Century Media.