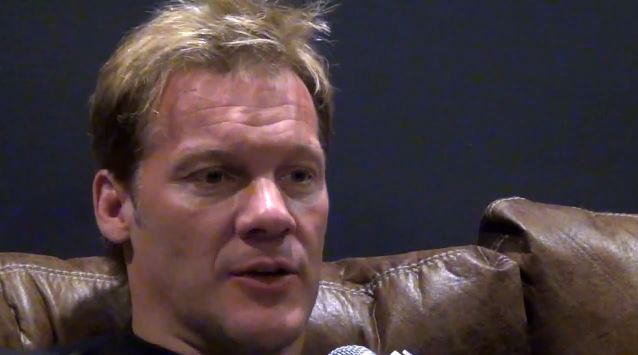 FOZZY's CHRIS JERICHO: 'I Love The Low Expectations That Some People Have For Us'

FOZZY singer and WWE wresting superstar Chris Jericho was interviewed by Terrie Carr for the latest edition of "Box Of Rock" on WDHA-FM 105.5 FM, the rock music station licensed to Dover and Morristown, New Jersey. You can now watch the chat below.

Asked if fans ever come to FOZZY shows expecting to see the "wrestling" Chris, Jericho responded: "When I go to [see] IRON MAIDEN [in concert], [MAIDEN singer] Bruce Dickinson is an airline pilot , but they're not singing songs about small bags of peanuts and sitting in seat 3D, they're IRON freakin' MAIDEN. And conversely, when Bruce is flying a plane, I don't want him singing 'Run To The Hills', I want him to land the plane. It's the same with us. This is not a wrestling band; our fans know that."

He continued: "I think sometimes people think I'm gonna be on stage wearing spandex and singing about body slams or something, but, you know, I just happen to have two things that I love to do and that I'm decent at doing.

"When Jared Leto can win on Oscar and sell out the Hollywood Bowl in one year, why can't we do the same?

Jericho also spoke about FOZZY's recent tour with THEORY OF A DEADMAN and how his band is going about winning over audiences while opening for bigger acts.

"Playing with THEORY OF A DEADMAN, they've got a huge fan base, a lot of radio songs, and not a lot of energy on stage," he said. "They're kind of really cool, and they've got an interesting groove. We come out there and we're basically hitting people in the face with baseball bats of rock. And yes, we have a lot of our fans that come and see this, but there's a lot of people that have never seen FOZZY or heard of FOZZY, or maybe have heard the band but not really heard us, and you can slowly see them warming up. Like, 'Who is this? Do I like this? This is cool. I like this.' And then chant 'FOZZY' at the end. So that's part of the fun as well — to see people's minds getting changed as you're playing to them. And that's why you do tours like this — it increases your fan base."

FOZZY will embark on "The Cinderblock Party Tour" in November in support of its new single and title track of its most recent album, "Do You Wanna Start A War". The trek, which will kick off on November 20 in Flint, Michigan, will feature special guests TEXAS HIPPIE COALITION and SHAMAN'S HARVEST.