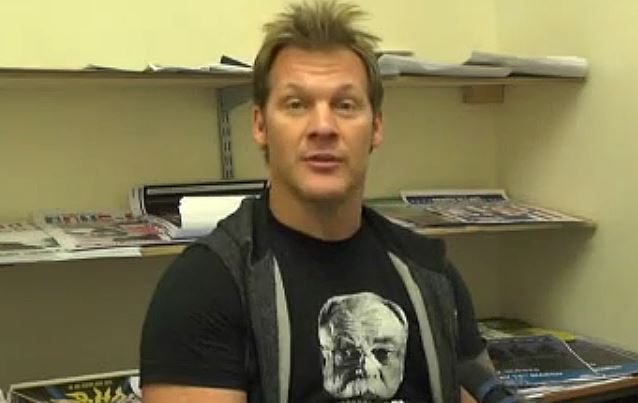 FOZZY's CHRIS JERICHO On His WWE Career: 'If I Never Wrestle Another Match Again, I'm Happy With It'

GetYourRockOut.com conducted an interview with FOZZY singer and WWE wrestling superstar Chris Jericho before the band's March 9 concert in Machester, England. You can now watch the chat below.

Speaking about how he manages to balance his wrestling and music careers, Jericho said: "When I was a kid, I wanted to be in a rock band and I wanted to a wrestler, so I've always done both. It's just that wrestling took off first. But I have demos that I recorded in '92, '93, '95, 97…

"I was always playing music; it's just wrestling was bigger. And then, over the last few years, FOZZY has kind of eclipsed, as far as… the mindset, or the priority, I guess, has been more FOZZY. You can see that by the time that I spend wrestling. It's not like, 'Okay, I've got time off from the WWE, so I go to FOZZY.' It's the other way around; I do WWE stuff in between FOZZY tours, and in between some of the other stuff that's going on."

He continued: "I've been very smart over the last ten years in building the Chris Jericho brand, and wrestling is a part of what I do, but it's not by far the biggest thing of what I do by any shape or form. And sometimes that confuses some of my fans, but I really don't care.

"If I never wrestle another match again, I'm happy with it. I've done all that I ever wanted to do and more. I still like going back [to wrestling] from time to time, because it's fun. But when other things come up, things that I've been working on for a long period of time, they start paying off, well, then you've gotta be there and spend that time on that as well."

Jericho added: "I've always lived my life doing what I wanna do and what feels right to me — not for money, [and] not what other people want me to do. If I listened to what other people want me to do, I never would have gotten into wrestling in the first place; everyone said I was too small. I never would have gotten into rock and roll in the first place; everyone said, 'You'll never do it.' So I learned a long time ago to be really happy with what you're doing career-wise; you have to follow your heart and do what you feel is right and commit to it. And if you commit to it, you'll make it; you'll do it. And, thankfully, the majority of my fans follow me throughout everything that I do. And if they don't, thanks for being aboard as long as you were. Thanks for being a part of it. And if you feel like you have to go the other way, that's cool too."

FOZZY's latest album, "Do You Wanna Start A War", sold around 5,600 copies in the United States in its first week of release to debut at position No. 54 on the Billboard 200 chart.

"Do You Wanna Start A War" was released on July 22, 2014 via Century Media. Produced by guitarist Rich Ward, the album features 12 tracks, including the debut single, "Lights Go Out", the title track and the return of the Theremin in "Bad Tattoo".