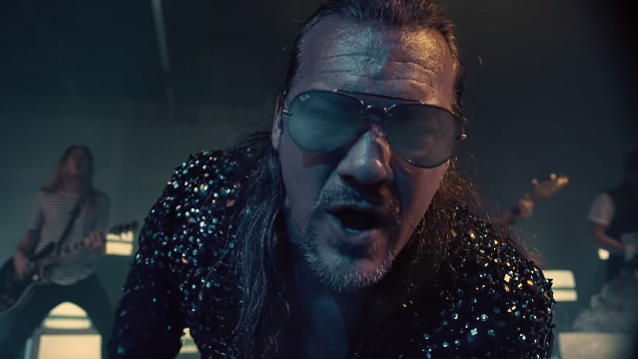 FOZZY singer Chris Jericho spoke to the KLAQ radio station about the band's latest single, "Nowhere To Run". The track is taken from FOZZY's forthcoming follow-up to 2017's "Judas" album, tentatively due in the spring of 2020 via RED Music.

"I think we really kind of figured out who we were as a band on the last couple of records, mostly so on 'Judas', and especially figured out what it is that people who like rock radio, what they wanna hear and the style of music they like," Chris said (see video below). "Now, that doesn't necessarily mean that we're writing for that demographic. When you look at 'Judas' and 'Painless' and 'Burn Me Out', they're all very accessible, very catchy, very hook-laden songs, but very heavy as well, with a little bit of a dark tone to it."

He continued: "When we did this song, which was a request by Sony — 'cause now that we're on this major label, you kind of listen to their advice — and they said, 'We want another single to keep the momentum going.' Even if the [new full-length] record isn't ready, they don't care. So this is the one that really kind of fit where we are right now, which is an extension of the 'Judas' record, but not exactly the same. But it does have that FOZZY feel and it's in the same vein."

According to Jericho, FOZZY guitarist and main songwriter Rich Ward believes that "Nowhere To Run" is the band's "best song." Chris said: "I think once more people hear it, and it continues to go up the charts, I think it might be as well. It's a great live song. It's very catchy. It's got the trick that we used on 'Judas' with three separate hooks. And that's the influence of [producer] Johnny Andrews, who's been very instrumental and been involved in the songwriting since he became our producer on the 'Judas' record. So, yeah, lots of hooks — very catchy, very much a radio song. It's fun to sing. It's not easy — it's not an easy song — but I think people are really responding to it. And when you do a song, you hope other people like it. When you start playing it live and you can see the reaction of people live, you know you've got something special."

Earlier in the year, Jericho told the FM99 WNOR radio station that FOZZY will take the time it needs to make a worthy follow-up to "Judas", whose title track has 31 million YouTube views, was No. 1 on iTunes charts in eight different countries and spent nine weeks in the top ten on the Active Rock Charts in the USA.

"The thing is you can't rush something like this, because 'Judas' had three Top 10 singles on it," he explained. "So it was a huge breakthrough for us — it really took us to the next level. Your next record has to be better — not as good; it has to be better. And so there's no reason to rush it. I find in this biz, 'Here today, gone later today,' if you make the wrong decisions, is very easy, and also, 'Absence makes the heart grow fonder.' So while people are waiting, as long as we know we've got some of this, like, 'Wow, this is very, very good, and we're gonna really continue this build that we've got,' then we'll be ready. Until then, we're gonna take the time it takes to get it right."