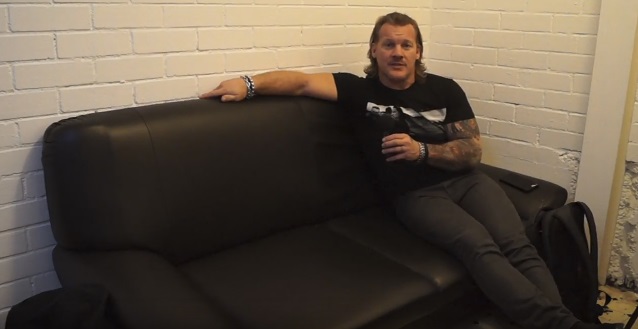 FOZZY's CHRIS JERICHO: 'We Want To Be The Biggest Band In The World'

FOZZY vocalist Chris Jericho was interviewed by Ornella Carlone of Comebackstage prior to the band's February 8 performance in Stuttgart, Germany. The full conversation can be viewed below. A few excerpts follow (as transcribed by BLABBERMOUTH.NET):

On touring with STEEL PANTHER:

Chris: "It's going really good. We've known those guys for a long time. We always have a lot of fun together. Their fans come to the show to have a good time, which is the same as FOZZY fans. Even if you don't know FOZZY or never heard us, pretty much every show, people are having a great time right off the bat, because they want to have fun, and that's the same vibe that our band has. Not a lot of other bands do, so it's a good package. Our mission with FOZZY is to have a good time and make sure people enjoy themselves at every show we play. We don't really have a lot of mosh pits or walls of death, but we have chants and clapping and smiles and dancing and all of the above, so that's the kind of our vibe that we like to do."

On FOZZY's growth over the years:

Chris: "We've been doing this for seventeen years, but over the last eight years is when we've really focused and really put all of our priorities into FOZZY. I think this last record, 'Judas', with the song 'Judas' and now 'Painless', the album itself has definitely taken FOZZY to a different level. I think every year, we've continued to build and build and build, and grow and grow and grow, but now is the biggest we've ever been, so it's an exciting time for us."

On the band's latest album, "Judas":

Chris: "This record was a little bit different from the other ones because we used a producer. Before, [guitarist] Rich Ward would produce all the records. This time, he and I decided, 'Let's do something a little bit different — let's use an outside producer, who we designate to be the boss. He makes the final decision. It doesn't matter what you want or I want. We leave it up to Johnny Andrews.' He helped us write the song 'Lights Go Out' on [2014's] 'Do You Wanna Start A War', so that's why we chose him. For 'Judas', he really took the reins and took control. I think that our band was always really good, but now, Johnny kind of helping us to find the real FOZZY sound has taken us to a completely different level. It's almost like when METALLICA worked with Bob Rock or KISS worked with Bob Ezrin. The first time you work with somebody that's outside of the camp, so to speak, it kind of pisses you off when he makes decisions you don't want them to make, but we made the decision to give him the final say, and we stuck to it. It paid off."

On juggling his different careers as a singer, professional wrestler and media personality:

Chris: "When I was a kid, I wanted to be in a rock band, and I wanted to be a wrestler. Those were my two goals. It worked out. A lot of people at the time were like, 'Oh, you'll never do it,' or, 'It can't happen,' but I never cared what other people thought. I cared just what I wanted to do. That's why I do all these different things, because once I made it in music and wrestling, in two completely different jobs, suddenly now I'm not scared to try anything or do anything. That's kind of why I have a lot of diversity in my career, but when I'm at home, I don't do anything but just be at home, take care of my kids and do as much as I can for them. That's the trade-off. I don't really have friends per se in Tampa — not that I don't have friends, but I don't really hang out a lot. I don't want to. I just hang out with my kids, and that's the way it should be. Now they're older, so they don't want to hang out with me, but still take care of them, drive them to where they're going and that sort of thing."

On his goals for FOZZY:

On February 28, FOZZY will kick off their "Judas Rising" headlining tour in New Orleans, Louisiana. From there, the 25-date trek will cross the entire country before coming to a close on April 8 in Hampton Beach, New Hampshire.