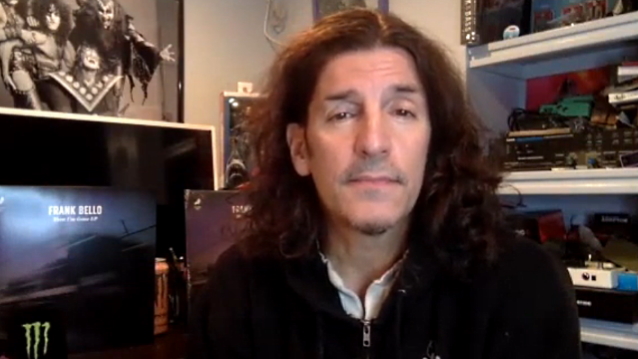 ANTHRAX bassist Frank Bello spoke to Meltdown of Detroit's WRIF radio station about the cancelation this past August of two shows on the band's North American tour with BLACK LABEL SOCIETY and HATEBREED. ANTHRAX called off dates in Dallas and Austin due to what at the time was being described as "a medical concern."

"We got COVID," Frank revealed (as transcribed by BLABBERMOUTH.NET). "Joey [Belladonna, vocals], Charlie [Benante, drums] and myself, all at once, we all got COVID at the same time.

"ANTHRAX, for us to cancel a show, it's gotta be pretty bad. We've played with high fevers and flus and everything — we've played through everything — but that COVID thing… I mean, we got lucky by only canceling two shows. It was a rough one. I tried everything. But I think Joey, it just landed in his throat, so we couldn't go. It made sense.

"On that, I was learning the vocals… I learned 'em before the tour in case something did happen to Joey with COVID, blah blah blah," Bello added. "So we've been getting ready to go. But, unfortunately, Charlie, Joey and myself all had it at the same time, so I couldn't even get up there and sing. We were gonna try it; we were gonna go for it. Scott [Ian, guitar] was gonna do some stuff; I was gonna sing some songs. It didn't work out. But I'm kind of glad Joey was better right away."

Last December, Bello said that he was taking extra precautions during the COVID-19 pandemic because he is suffering from "an immune disease" which makes it easier for him to "get sicker faster."

This past summer, former ANTHRAX guitarist Paul Crook revealed that he served as the "understudy" on the band's tour with BLACK LABEL SOCIETY and HATEBREED in case Ian, Bello or guitarist Jonathan Donais got sick and was unable to perform.

Crook, was played with ANTHRAX between 1995 and 2001, contributing guitar work to the "Stomp 442" album and the follow-up "Vol. 8: The Threat Is Real", wrote in an Instagram post: "A lot of tours/ shows are getting canceled due to the obvious, I feel the understudy thing is going to become commonplace. The guys had a health issue that began in Texas… I joined the tour in Atlanta shortly after."

In early 2023, ANTHRAX and BLACK LABEL SOCIETY will head back on the road for a 24-date tour, making stops in all new markets, with both bands playing headline sets. Joining ANTHRAX and BLACK LABEL SOCIETY as special guest on this run will be EXODUS. The trek will launch on January 17 at the Revolution Concert House in Boise, Idaho and wrapping in Oakland, California at the Fox Theatre on February 18.

ANTHRAX's latest album, 2016's "For All Kings", was called by some critics the band's strongest LP to date. Its arrival followed a five-year period during which the group experienced a rebirth of sorts, beginning with ANTHRAX's inclusion on the "Big Four" tour, and continuing with the release of comeback effort "Worship Music".