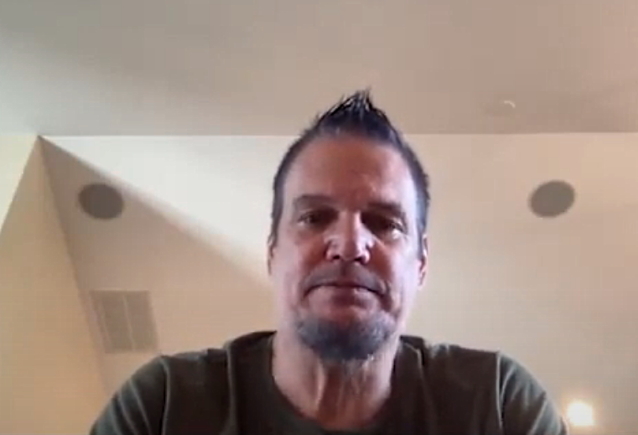 DISTURBED guitarist Dan Donegan spoke to Rock 100.5 The KATT's Cameron Buchholtz about the band's plans to hit the road in support of its newly released eighth studio album "Divisive". He said (as transcribed by BLABBERMOUTH.NET): "Hopefully we'll be able to announce [some tour dates] soon. It's definitely in the works. We headlined a bunch of festivals this summer and [we spent time] just setting up this release. But we do have stuff on paper that we looked at and we agreed to it. Now it's in the hands of our management and our booking agent and the promoters to make it logistically make sense, of the routing. So hopefully we'll have something we could announce soon."

He added: "We just finished a couple of weeks ago in Dallas, a big show we did out there, and, like I said, we were just doing these festivals mainly. And then [the album] coming late at the end of the year, I think we were just doing more press stuff and preparing for a more productive show. Plus we wanted, unfortunately, to let time pass a little bit now that things are kind of slowly returning to normal. But it's been challenging for a lot of bands too, as you may have heard, just logistically 'cause of inflation. So a lot of artists I've seen, especially over in Europe… I know that SHINEDOWN had to postpone their tour, ANTHRAX, I think a few others. 'Cause a lot of that stuff has skyrocketed on prices on, obviously, fuel costs and production costs and trucking costs and travel. So it's been a little challenging for a lot of these artists to go out and do all these tours. That's why I said we're just trying to make sure that with the promoter we can do a proper routing so we don't run into that same problem of having to postpone any dates. It's just unfortunate. The nature of the environment right now is just a little challenging."

Earlier this month, DISTURBED frontman David Draiman was asked by Andy Hall of the Des Moines, Iowa radio station Lazer 103.3 if he and his bandmates are planning to hit the road "pretty hard" in support of "Divisive". He responded: "Not as hard as you would imagine. We're planning on starting up in the spring. We've already announced a few shows here and there. We're trying to finalize all of our plans. But DISTURBED performances will be getting more and more infrequent. We'll start up in the spring. We'll finish in the fall. There will be a full U.S. run. Exactly when we're going where, I don't know yet; it's still a moving target. I know we're planning to do a European festival run as well; a couple of those dates have been announced already. But it's tough to navigate the waters right now. So we're doing the best we can. Hopefully we'll be able to announce more as soon as it's able to be announced."

In a separate chat with HardDrive Radio, Draiman elaborated on some of the challenges DISTURBED has encountered trying to book a pandemic-era tour. He said: "Figuring things out is almost like a fluid thing. Literally just last week I thought we had a solidified schedule and where we were stopping and starting. And we've had to switch gears because things changed again. You roll with the punches. The idea is for us to start in the spring and to do a full-blown summer tour of some kind. [Laughs] And we were planning on going to do some of the European festivals. What actually ends up solidifying and happening, other than what's already been announced, your guess is as good as mine, because there's so much in flux right now. But that at least is the intention. We'll see what happens."

"Divisive" arrived on November 18 via Reprise. The LP was recorded earlier this year with producer Drew Fulk (MOTIONLESS IN WHITE, LIL PEEP, HIGHLY SUSPECT) in Nashville, Tennessee. The follow-up to 2018's "Evolution" includes the three recently released singles "Hey You", "Unstoppable" and "Divisive".

Guitarist Dan Donegan's divorce inspired the "Divisive" song "Don't Tell Me", which is a duet with HEART's Ann Wilson. In two decades, it breaks ground as the first-ever guest collaboration on a DISTURBED record. Clean guitar soundtracks the story of a long-term relationship in the middle of its last gasp. David and Ann engage in a call-and-response before locking into a skyscraping harmony as the solo reaches for the heavens.

About the "Divisive" album title, Draiman noted: "Partisan tribal warfare has become a part of our regular existence nowadays. It's one big battle of the cliques. The whole idea of the record is to be a wakeup call for everyone. Our society has become addicted to outrage. Music is the best cure for what ails us though. If only everyone reached out and used it. There's no better environment to forget about all of this shit than live music. We can be together and realize we have more in common than not. Recognize what's happening and let's make a change for the better."