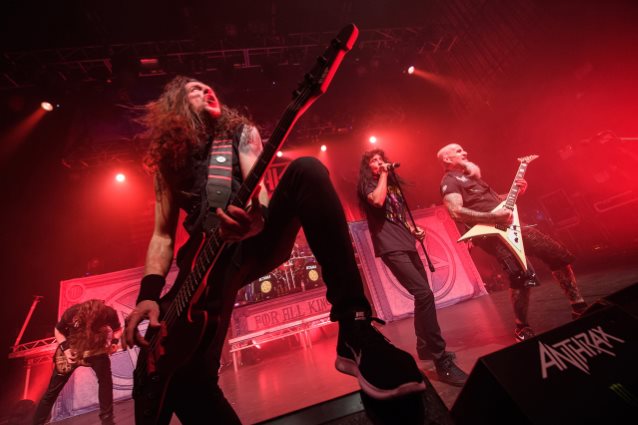 Italy's Rock Rebel Magazine conducted an interview with ANTHRAX bassist Frank Bello prior to the band's March 14 show at Live Club in Trezzo sull'Adda, Lombardy, Italy. You can watch the chat below. A few excerpts follow (transcribed by BLABBERMOUTH.NET).

On why the band's 1987 "Among The Living" album continues to endure 30 years after its release:

Frank: "You've got to think, after all this time, it's great to see people reacting to it. Think about it: If it's 30 years old, people get it. You'll see tonight, it's crazy; it's like it just came out. It's very fresh to them. You'll also see a bunch of different people in the audience. You have a big crossover of fans now. We have anywhere [from] 12 years old to 60 years old; everybody is together now. There is a new generation coming up, so for them to see it, to see this 'Among The Living' thing, but it's the 'Among The Kings' tour we're calling it. We do the whole 'Among The Living' album, but then we do some other songs which people really like, from 'For All Kings', our new record. Everybody is very satisfied at the end of the day. Everybody's hand is up in the air, which is all that matters to us. We're very happy about that."

On rumors ANTHRAX and Lady Gaga were considering doing an album together:

Frank: "Lady Gaga is a friend of ours. She's amazing. We love her, but she just did the Grammys with METALLICA. She's a metalhead, which I love, she's awesome, so we'd love to work with her. We'll put it out there; she doesn't have a lot of time, she's very busy. We want to see her do well. She's metal and we love her for it. Of course we'd be very open to that, but nothing is planned now."

On the atmosphere within ANTHRAX while recording "Among The Living":

Frank: "The great thing is not knowing. All you know is there's a vibe. There's a vibe going on in the music scene, especially in the '80s. You've got to remember, it was us, METALLICA, SLAYER, MEGADETH. There was a movement of metal — right in your face. We were all IRON MAIDEN fans, JUDAS PRIEST fans, so we had this great community of metal people coming up and fans, so we knew there was something special that was going on. When everybody came out with their records, it really broke over the top. 'Among The Living' came out for us and it put us in a different elevation."

On the sometimes comedic element to ANTHRAX's appearance and music:

Frank: "We don't really like to have a bad time. When I'm onstage, I have a good time. I love what I do; thank God, I'm very happy that I can play music. There's some parts you want to get into it and rip it up, but for the most part, look, you got to look at it my way: I'm connecting with fans. I'm a fan connecting with other fans. I'm in a good mood and I want to have a good time. People come to a metal show to get away from their problems. You want to have a good time, right? That's where you do that. That's where you're allowed to do that. I think it's fun."

Frank: "I don't think thrash ever left. I think it's always been here; for me it has. Music in general, everything in life, there's peaks and valleys. Just because it's not as popular in one point in life, doesn't mean it's not there. Peaks and valleys. It can become less popular, then it becomes popular again. It's cycles. The older you get, you see this. Everything comes in cycles. It's just the truth. That's how life is."

On whether ANTHRAX should take a stronger political stance in light of recent events:

Frank: "No. We're just musicians, and not because we're Italian or anything like that. We're just people. If something is affecting us, maybe that will come out like that, but the last thing I want to do as a musician and songwriter is preach to anybody. I think musicians should be heard through music. I don't want to be preaching to anybody. Everybody has their own opinion about everything. You keep yours, I'll keep mine and everybody's happy."

On his favorite memories from the "Among The Living" album cycle:

Frank: "Lots of touring. You've got to remember, in those days, breaking, people say, 'You're breaking,' and the record broke and it became big. You didn't stop touring. We were never home. All I can remember from that period is that we did the record, it came out and every tour, I remember, I think we opened for so many bands. I just don't remember being home in '87 and '88. It was non-stop, say hello to my family once in a while, and then we were back on tour. It was a great time. The energy…it was electric. I tell you, and I see that and that's a great memory from then, but what I see now, is a beautiful thing going on now. There's a new generation of fans along with our old fans. There's something like that energy. There's something that electric, this electricity we have, it feels like this 'For All Kings' People are really reacting to this when I see it. It's all around the world what's going on. We've been touring this thing forever. It's been out a little over year; we started touring before the record came out. It's been non-stop."