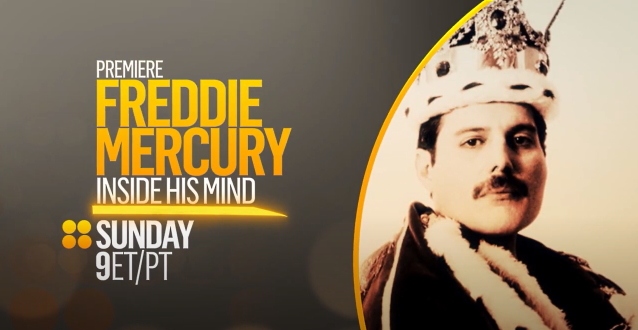 FREDDIE MERCURY: 'Inside His Mind' Episode To Premiere On REELZ This Weekend

Freddie Mercury was an unparalleled frontman with a complex personality notable for being bombastic yet shy, excessive yet humble, exalted yet lonely. His hedonistic lifestyle captivated fans and the press while his creative genius saw him top the charts with several hit records as the lead singer for QUEEN. But hiding behind his carefully crafted public persona was a tumultuous inner life that very few witnessed.

With more than 30 years spent psychologically profiling the most complex minds from world leaders to notorious serial killers, acclaimed psychiatrist Dr. Bob Johnson unpacks one of the most marvelous and misunderstood musical minds in pop history with an intimate look at Mercury's life.

"Freddie Mercury: Inside His Mind" examines the wondrous world Mercury built for himself through creating multiple personas that he used to manage vulnerabilities that afflicted him since he was a child. Combined with personal stories from those who knew and worked with Mercury — including childhood friends, his personal assistant for more than a decade, Peter Freestone, and road manager Peter Hince — hear in Mercury's own words his struggle with creating and maintaining alternate personas including finding himself lost in the ravenous indulgences of excessive sex and drugs.

"Freddie Mercury: Inside His Mind" is produced by Honey Bee.