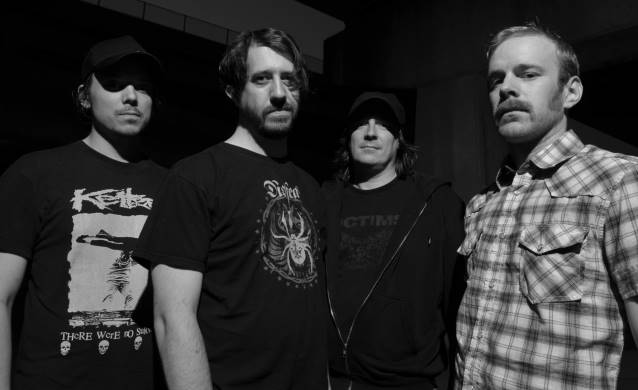 Swedish grindcore powerhouse GADGET has entered the studio to record its third full-length LP and follow-up to 2006's "The Funeral March". The band is currently holed up in drummer William Blackmon's The Overlook Studios, recording and producing its first new material since 2010's split with PHOBIA. Guaranteed to be 100% true grindcore, the 18 songs were written sporadically since 2009 with the majority of new material manifesting in 2013. A fall 2014 release via Relapse Records is expected.

Guitarist Rikard Olsson commented: "Since it was so long ago we did an album, it still feels weird and kind of unreal!

"It's early to exactly say what the outcome will be like, but it's still the same four guys in the band, so it will be GADGET for sure. Perhaps a slightly more 'old-school' aproach to the songwriting (comes with age, I guess...),but we still have our death and doomy sludge parts thrown in the grinder!"

William added: "It's definitely more 'in your face' on this album — less death metal influenced, more old-school grindcore. Plus the mandatory doom parts, as Rikard mentioned."