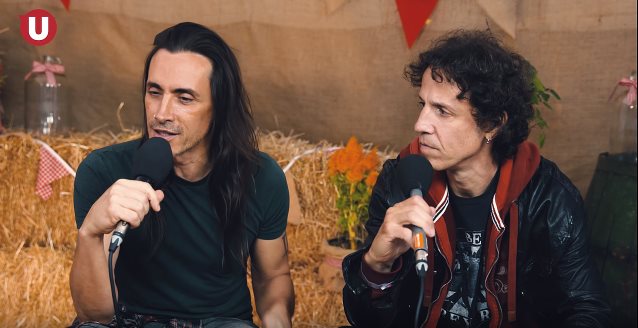 Kylie Olsson of uDiscover Music conducted an interview with EXTREME vocalist Gary Cherone and guitarist Nuno Bettencourt at Ramblin' Man Fair, which was held July 29-30 at Mote Park in Maidstone, Kent, United Kingdom. You can watch the full interview below. A few excerpts follow (transcribed by BLABBERMOUTH.NET).

On the "funny" places the band has heard their hit power ballad "More Than Words":

Nuno: "Especially at the height of that song, we'd be on tour anywhere in the world and sometimes we'd come down for our usual early breakfast at 2 p.m. and you'd walk by these function halls and big doors and you'd hear something familiar. You'd crack the door a little bit and you'd look in and see the bride and groom dancing to what was 'More Than Words'. You say to yourself 'Should I go in? Should I crash it? Should I go in and sing?' You close the door and say 'My work is done here.' You can move on."

Gary: "The strangest I've heard it is while I was getting my teeth cleaned."

On the band's current plans:

Nuno: "We're recording and writing a new album. Hopefully, we'll release a song by the end of the year, but if not, the whole thing next year."

On starting their career in an era (the 1980s) when record companies allowed bands to develop and grow over an extended period of time:

Nuno: "For the fear of sounding like that old guy going 'Back when…' It's changed. I'm not sure it's so much for the better for the younger artists. If you caught the ones that existed, but back then, like you said, a label would sign you for six albums because they wanted to develop you. You try to imagine all the great bands that we grew up with, whether it's THE BEATLES, or [LED] ZEPPELIN getting one shot or one album or not getting [THE BEATLES'] 'Sgt. Pepper' or not even getting to those albums. It's tougher on younger artists, especially with the 'X Factor', the quick kind of roads you go: 'Should I stay in the basement and actually become a great artist? Or should I go for the audition on television and try to become a big star?' If you think about it back then, I think if [Bob] Dylan or maybe Madonna or any of these people, if they tried to audition for those, they'd kick them out because they weren't the greatest singers in the world. But they were legends."

Gary: "It's a different world. Back then, to this day, EXTREME was always in our own little bubble. We just did what we wanted to do, regardless. I don't think it would have mattered today if we came out. We might not of had the success, but we'd still be doing the same stuff."

On what they think of their debut album when they listen to it now:

Gary: "We do a couple songs off that record. It's a little dated, some of the songs still hold up, but I think it's a…"

Gary: "It's like looking at a high school picture."

Nuno: "Why did I wear that? What am I doing? Some of the lyrics sometimes sound a bit young, but we were young. The hair, that bi-level perm, the haircut you might have…"

EXTREME is currently working on the long-awaited follow-up to 2008's "Saudades de Rock".

A live package celebrating EXTREME's "Pornograffitti" album was made available last October. Titled "Pornograffitti Live 25 / Metal Meltdown", it includes a DVD, Blu-ray and audio CD recorded at the band's show at the Las Vegas Hard Rock Casino on May 30, 2015, where they performed the record in full.